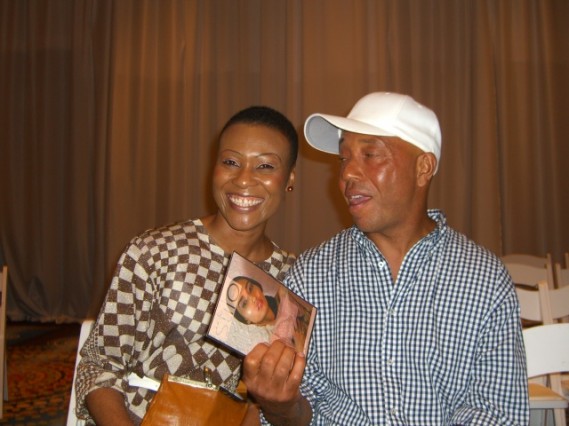 Entrepreneur Russell Simmonsappeared at Eden Rock Hotel on Wednesday, October 14th. 2009, during Miami Fashion Week to showcase his new line, the Spring 2010 Collection of Argyleculture. A crowd greater than 700 people waited in anticipation for what has been named as Mr. Simmons’ greatest collection to date. The Fashion Show itself took place over a long pool outside of the hotel. The models glided on and off adorned in clean and simple clothes, fabrics rich in color and electric color schemes. The show was then interrupted by Mother Nature who decided to make her own announcement through a torrential downpour.  The crowd was soon directed inside the grand room of the hotel where a couple of shuffles and minutes later, they were seated. With the music reverberating through the walls, the show went on. The clothes that had initially been clean and simple suddenly became more elaborate. Russell’s Men collection was one of the most definitive ever presented in a fashion show. The men were adorned in full wardrobe. The women who glided on the runway were also adorned in full spring wardrobes, soft colors coupled with bold argyle print tops. The public was left in awe. Russell Simmonshad done it again. He had created a line which was not only versatile but also conveniently affordable.

Premier Guide Miami’s Marie-Junie Pierre had a chance to conduct a brief interview with the Entrepreneur at the end of the Fashion Show.

PGM: First off, I must say that the show was amazing. The versatility and affordability of your collection is unlike any other I’ve seen. What inspired this new collection?

Russell Simmons: This new collection was inspired by the lack of mentors in the Urban graduates. The Urban community needs more mentors that could focus on this new America. Some current mentors who are doing accordingly are Obama, Adam Sandler and Jay Z. Many people in our community are not able to afford Ralph Lauren and I realized the need for the creation of a collection which could be something sexy of their own. Many of them grew up on Sean John and Rocawear. I wanted to create something which could be passed down to the next generation.

PGM: Of all the places to come out with this collection, why did you choose Miami?

Russell Simmons: I chose Miami because of the mix of different languages, the versatility, and the fun and vibrant lifestyle with which it is associated. I really like Miami Fashion Week so I thought Miami was the best place to come out with my collection.

The collection infuses original urban concepts with the buttoned-up styling of men’s professional attire. The argyle pattern has always been a signature style in Simmons’ wardrobe as well as a staple of the Phat Farm brand. Even though Russell Simmons Argyleculture employs Simmons’ name, it only appears on the label, not on the clothing.

For more information on Russell Simmons and Argyleculture, visit http://argyleculture.com/store/index.php.