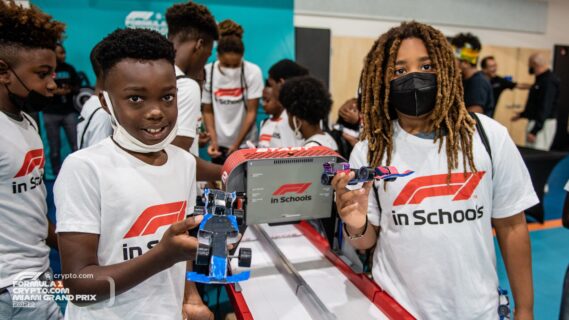 South Florida Motorsports (SFM) has released the findings of the first Economic Impact Report for the Formula 1® Crypto.com Miami Grand Prix which reveals the local economy was boosted by nearly $350 million. Compiled by leading economic consultants Applied Analysis, the report details the specific fiscal benefits to the South Florida and Greater Miami regions, including Miami Gardens.

“We were proud to deliver on the commitment Stephen Ross made to impact the local economy and the people throughout our community; especially right here in Miami Gardens,” said Richard Cregan, CEO of the Crypto.com Miami Grand Prix. “Our team worked selflessly to create a campus and experience that was unique to the international culture of Miami. We look forward to growing the event and the positive impact it will continue to make here for years to come.”

In the first week of May, the venue hosted the first-ever Formula 1® Crypto.com Miami Grand Prix held around a new 19-turn circuit known as the Miami International Autodrome, built around Hard Rock Stadium in Miami Gardens. The race, which is one of 23 races worldwide comprising the 2022 Formula 1 Championship and will take place at the Miami International Autodrome for at least the next nine years.  The weekend attracted over 243,000 spectators across the three days and culminated with a thrilling race as Red Bull’s Max Verstappen beat the Ferrari of Charles Leclerc. 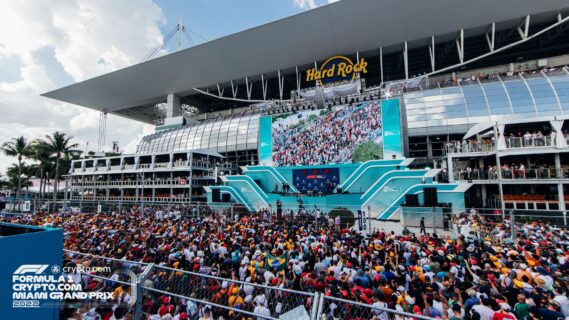 As well as enjoying the on-track action, fans were able to soak up the incredible atmosphere of the event which quickly became the hottest ticket in town. Celebrities from the worlds of film and pop mingled with sports stars in luxury VIP hospitality areas, such as Hard Rock Beach Club and MSC Cruises Yacht Club while international DJs performed to the entire campus and Miami restaurants served up the best local cuisine.

The report highlights the overall economic impact of the race which has rivalled, if not exceeded, other events held in the South Florida market area. The operational and net visitor spending impacts are likely to recur in future years and have the potential to expand as the event matures. When operational activities and net visitor spending are aggregated, the overall economic impact reaches $349 million annually and supports more than $100 million in salaries and wages for over 3,000 local workers.

Visitor spending in the Greater Miami region during race week reached over $150 million. The average visitor to Miami for the race spent a total of $1,940 while in the city, which was nearly double the typical non-Formula 1 visitor. In addition, 84% of visitors traveled to Miami primarily for the event and 66% of attendees were out-of-town visitors. The tourist influx data revealed the country with the largest number of visitors was Canada, closely followed by the United Kingdom, Mexico, Colombia, and Argentina.

The race was an extraordinary success from a broadcast perspective with 23 million US viewers spread across the weekend. The Saturday qualifying audience was 7.6 million rising to 15.4 million for Sunday’s race. In addition, viewership increased 27% compared to the 2021 US Grand Prix in Austin, TX across the weekend.

Initial planning on the newest venue in Formula 1 started in the spring of 2019, while the first moment of ground-breaking on the campus was in April 2021.  A total of $50 million in salaries and wages were earned by 867 local employees during the construction phase of the project alone. The report concludes that the total economic impact of the track construction reached approximately $143 million when the indirect (vendor purchases) and induced (employee spending) impacts are considered.

The Formula 1® Crypto.com Miami Grand Prix made an intentional commitment to empower and directly benefit the City of Miami Gardens and its residents. Fourteen minority owned restaurants were featured throughout the Campus and in partnership with Food Rescue US South Florida, Sodexo and Turn 5 Kitchen were able to donate edible food local shelters.

Furthermore, the F1 in Schools program administered through the Miami Gardens Parks and Recreation Department and Seeking Education Empowers Knowledge (S.E.E.K) brought STEM education directly to Miami Gardens students.  In addition, 12 students from Miami Gardens received event internships and 1,500 tickets were distributed to local residents. There was also a commitment to sustainability across the Campus with the elimination of 99.4% of single use plastics at Hard Rock Stadium. Aluminum water bottles, free water stations with reusable cups and plastic free serving vessels, plus three biodigesters to eliminate food waste, were in addition to other recycling facilities around the circuit.