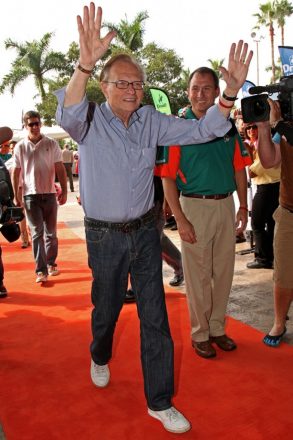 Catch the world’s most famous seated interviewer…standing up!  The global broadcasting legend will bring his “Larry King: Standing Up” stage show, including hilarious personal and professional stories of his 50-year career, to Hard Rock Live at the Seminole Hard Rock Hotel & Casino on January 25 at 8 p.m. The show will be directed by Kids in the Hall’s Jim Millan and produced by recording industry executive and music publisher Karl Engemann. Tickets go on sale Friday, December 23 at noon.

Larry King is a name that has been woven into the fabric of American culture, being invited into the living rooms of millions of people every night for 25 years on CNN.  He has been kissed by Marlon Brando; he’s tussled with Jerry Seinfeld; he was the first to sit down with Paris Hilton after she left prison; he’s interviewed people that never give interviews like the press-shy Frank Sinatra; and his coverage of 9/11 will forever be remembered.  In today’s society, you can’t be considered a success until you’ve sat down across the table from the master: Larry King.

For the past five decades, King has been the one asking the questions.  Now, he turns the tables on himself with his brand new stage show, “Larry King: Standing Up.”  The Emmy®, Peabody and CableACE Award-winning broadcast icon will be giving fans a hilarious and insightful look inside the legend.  Starting with his life growing up as a street-smart kid in Brooklyn to tales from his storied career as the greatest interviewer of all time, Larry King’s style and wit will give audiences an evening to remember.  This unique tour will mark King’s first stage appearance since completing his triumphant 25-year run on the award-winning CNN program Larry King Live.

Larry King has been dubbed “the most remarkable talk-show host on TV ever” by TV Guide and “master of the mike” by TIME magazine. The Emmy Award-winning King hosted CNN’s Larry King Live, the first worldwide phone-in television talk show and the network’s highest rated program for over 25 years. He also hosted Larry King Weekend for CNN, as well as a series of specials for CNN’s sister network, TNT. Entertainment Tonight has called him the “master interviewer.”  In addition, he wrote a weekly newspaper column for USA Today and has written 15 books.  Described as the “Muhammad Ali of the broadcast interview,” King has been inducted into five of the nation’s leading broadcasting halls of fame.

Both his radio and television shows have won the George Foster Peabody Award for Excellence in Broadcasting. He also has won a News and Documentary Emmy Award for Outstanding Interview/interviewer and 10 CableACE awards for Best Interviewer and for best Talk Show Series.  King has received honorary degrees from George Washington University, the New England Institute of Technology, Brooklyn College and the Pratt Institute and was a commencement speaker at Columbia University Medical School.  In 2009, he received an honorary doctorate degree from Bradley University in Peoria, Illinois.  He has made cameo appearances in 23 movies including Ghostbusters, Primary Colors, Contact, The Kid, The Contender, America’s Sweetheart and three Shrek films. King has also appeared in such television series as Murphy Brown, Frasier and Murder One.

He founded the Larry King Cardiac Foundation, which awards grants to individuals suffering from heart disease to help pay for much needed medical treatment. He also is involved with the American Heart Association and the Save the Children Foundation.  After more than 25 years, holding the record for hosting the longest running talk show, with the same host, in the same time slot and on the same network, King ended his CNN Larry King Live daily talk show to spend more time with his wife and children and to launch other projects in media, entertainment and business.  In so doing, Larry King joins Ted Turner, Tom Brokaw, Charles Schwab and other notables on the VIP Jury of the 2011 Film Your Issue, a groundbreaking entrepreneurial initiative and competition directed at those 50 and up, inviting new society-benefitting projects in partnership with the U.S Chamber of Commerce and Sony Pictures Entertainment.

Tickets cost $39, $54 and $69*; all seats are reserved and available at all Ticketmaster outlets online at www.ticketmaster.com or charge by phone: 1-800-745-3000. Doors open one-hour prior to show start time. *Additional fees may apply