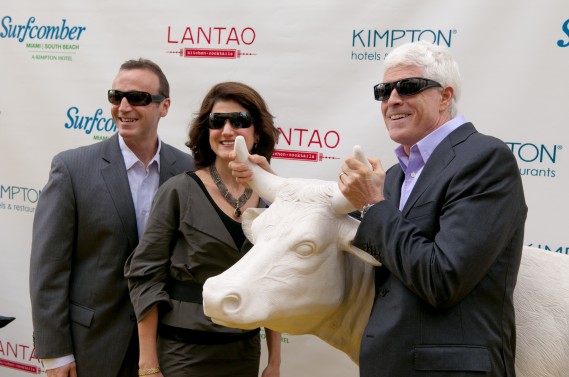 Following a multi-million dollar, top-to-bottom renovation of the hotel, Surfcomber celebrated the beginning of a new era with a pool party-inspired gathering that incorporated the drop of 186 beach balls – one for each of the hotel’s guest rooms – into its famous pool. Guests took part in the fun donning sunglasses and flip flops and sipping on specially-prepared “mocktails” courtesy of the hotel’s restaurant, Lantao Kitchen + Cocktails. And what “pool party” would be complete without a chance to pose for pictures with Surfcomber’s resident life-size cows and sheep, which reside on-site in, what else, but the “backyard”. 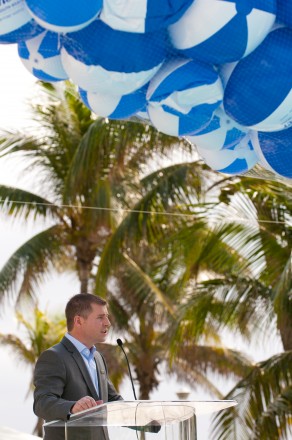 “As a hotel company known for its style-driven properties and focus on customer care, we are excited to bring a unique twist to the South Beach scene with our brand of whimsical fun and approachable service,” said Sean McKeen, general manager, Surfcomber.

”With the reopening of the new Surfcomber, Kimpton has made a noteworthy contribution to the revitalization of South Beach – adding a unique and refreshing transformation to this iconic district that’s visited by millions each year,” said William D. Talbert III, CDME, President and CEO, Greater Miami Convention and Visitors Bureau.

Sitting on the Atlantic Ocean’s edge along 200 feet of oceanfront property in the heart of the Art Deco District, the new Surfcomber Miami, South Beach officially re-opened on December 1, 2011. It joins Kimpton’s two other Florida hotels, the top-rated, waterfront EPIC in downtown Miami, and the luxurious, oceanfront Vero Beach Hotel & Spa. Together, the three provide Kimpton brand loyalists with something for everyone.

The new Surfcomber offers guests a stylish and playful escape within a trilogy of sun, surf, and sand. From pop prints and poolside cabanas furnished with rocking chairs, to chic European porch-style furnishings, this re-invented South Beach classic brings a singular style defined as “backyard bliss” to this fashionable neighborhood. Intended to be as cool as it is friendly, and as sexy as it is fun, the property’s design elements promise a stylish escape with a sense of playfulness and belonging.

In addition to the hotel’s distinctive design, the overall sense of style and playfulness will be represented through Surfcomber’s employee uniforms as well, with key members of the staff outfitted in Original Penguin clothing, the American, vintage-inspired lifestyle brand. Future collaborations between Surfcomber and Original Penguin are in the works.