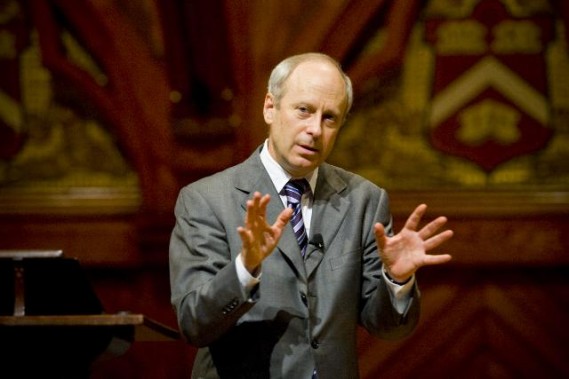 Political Philosopher and Harvard Professor, Michael J. Sandel, has engaged the American society in public debate and policy for many decades. Having gained acclaim for his philosophical critique of John Rawls, Theory of Justice, Mr. Sandel opened the eyes of many Americans to the various underlying factors involved in their personal philosophies and political and social beliefs. As a professor at Harvard University, his course on “Justice” is one of the most attended courses in the university’s history, giving students the tools to examine the morality and justice in American Political life. Premier Guide Miami’s Marie-Junie Pierre got a chance to conduct a one on one interview with Mr. Sandel at Books & Books, in Coral Gables, where he read excerpts from his new book, “Justice:  What’s the right thing to do?

PGM: Thank you so much for meeting with Premier Guide Miami tonight. I really enjoyed your reading tonight. First and foremost, what would you like to leave your readers with in this new book?

MJS: I would like to leave my readers with big questions about justice, the individual and the common good. These are ideas which the philosopher wrote about and which are at stakes in the debates we have everyday. It encompasses the moral dilemmas we wrestle with and the political controversies that we argue about, like bail out, torture, same sex marriage, affirmative action, and income distribution. All of these current debates raise big philosophical questions and the book is an attempt to enable people to think through what they believe and the reasons behind those beliefs on big questions like ethics, justice and what it means to be a citizen.

PGM: Do you think it is possible for the American public to redefine our perception of marriage, when it comes to same sex marriage?

MJS: I think that social institutions do change and part of democratic liberation among people with different views is to try to work out the meaning of marriage or the meaning of any particular social institution that we care about in our time. These debates are about fundamental purposes. They raise big questions about people’s values and our politics would go better if we addressed those values directly in our politics and really appeal the principle underlying the positions that we take.

MJS: I am in favor of same sex marriage but I think it has be argued out democratically, which is currently happening state by state. People are having these debates, sometimes in the Court and also very often within the democratic process.

MJS: I think we have to decide whether some decent level of healthcare is the fundamental right of citizens. This has to be established and it has to be established by President Obama and those who favored a change in the healthcare system. The reformed healthcare system must include everyone so that no one suffers from the effects of their health, due to no fault of their own. As citizens of a democratic society, we are responsible to ensure that everyone has healthcare and to take responsibility for those who are unable to provide accordingly for themselves.

PGM:  What kind of effects do you think the adoption of a reformed healthcare system, similar to that of France, Germany and Britain, would have on the American government?

MJS: I think that it will change public policy and might also over time change the kind of public ethic that we as Americans have. Most European democratic countries do have universal healthcare, as you mentioned. They have different systems with different rules for governments and markets but all of them provide universal healthcare in one form or another. I think it is time for us to do that in the United States.

PGM:  What would you like to leave in your legacy?

MJS: I would like to be able to contribute to improving public debate and to do it in a way which involves not only students and scholars but also engages citizens from everywhere who care about democracy.

PGM: Thank you so much for taking the time to speak with us tonight. Premier Guide Miami wishes you the best.