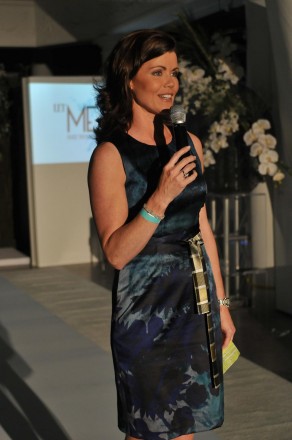 MIR MIAMI 2009, hosted by Lian Fanjul’s Mission International Rescue (MIR) Charities, fused the most rousing elements of South Florida’s thriving social scene with philanthropy at the heart of the night at the historic Moore Building. The event marked the commencement of a signature tradition for MIR with the presentation of the first ever MIR Humanitarian Awards. In addition, the international charity raised tens of thousands of dollars to support the on-going MIR projects in the Dominican Republic. The action packed evening boasted an excess of thrills and eye-candy, with fire and aerial ‘cirque’ inspired acts, an exclusive fashion show with designs direct from Paris, floral works of art, VIP lounge accommodations, al fresco cocktails, interior design masterpieces, celebrity appearances, shopping galore and more.  The A-list roster of guests and host committee members in attendance included Raysa Fanjul, Henry Gonzalez, Ignacio ‘Nacho’ and his wife Delphina Figueras, Andres and Kathy Fanjul, Ray Rodriguez, Abigail Pollak, and Oblio and Barry Wish. 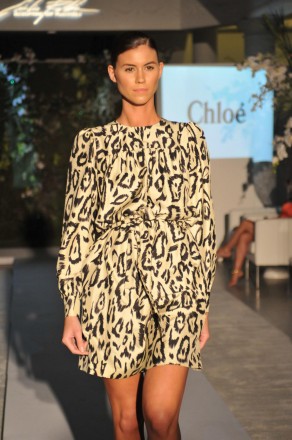 MIR Founder, Lian Fanjul de Azqueta, stated: “We are extremely excited to have produced an amazing event of this caliber in the United States, which welcomed all generations and treated them to an evening full of surprises and entertainment; we all brought our talents and resources together to give back to a community in need. With everyone’s support and all of our new friends we hope to continue to expand the foundation’s efforts and raise additional funds, so that we can better support our mission to provide educational and medical opportunities for those who cannot procure it themselves in the Easter Region of the Dominican Republic”. 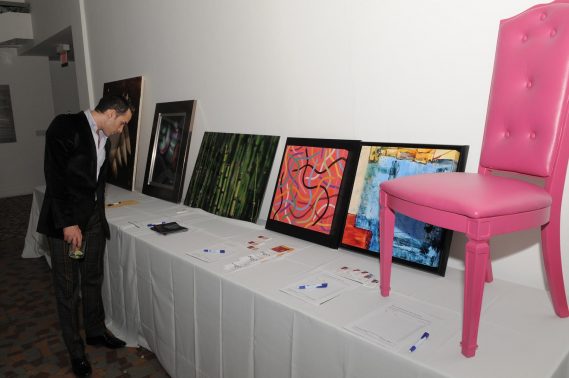 At 7.00 p.m. red carpet arrivals commenced, as ushers guided guests through a statuesque Tiffany Blue Box, and escorted them to their private table accommodations. The elite and celebs were situated on the first level of the deco inspired Moore Building, which was transformed into a luxe VIP Lounge hosted by the leader of legendary style Tiffany & Co. “Our participation in MIRMIA 2009, and many of MIR Charities’ events, is of great importance to us because we strongly believe in supporting our customers’ interests and their meaningful activities outside of the stores and within our society. MIR is a wonderful and effective organization, which we have seen gain momentum and strength throughout the years, and that we aspire to continue to grow with in support of their cause,” remarked Henry Gonzalez, Tiffany & Co. Group Director for the Miami Market. 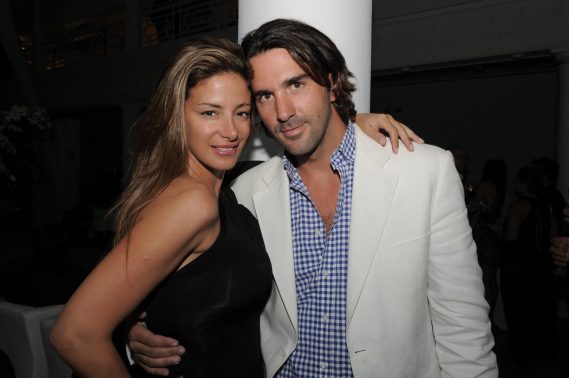 As guests became acquainted and settled in, the ever so charming Local 10 News Anchor Laurie Jennings officially kicked off the festivities with a grand welcome, giving special thanks to guests and sponsors alike, and dropping hints of the grandiose series of events that were to take place throughout the course of the evening. 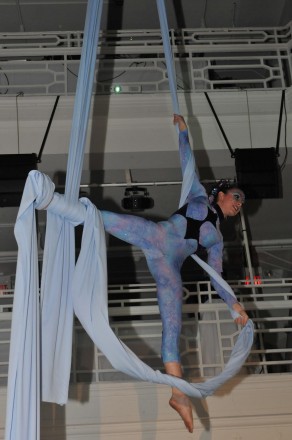 The first level, furnished by Ronen Furniture, was outfitted with all white sleek couches and accentuated with hues of Tiffany Blue lights and adorable blue boxes. Emilio Robba united nature with art, and whisked away everyone’s imagination with his original floral sculptures sprinkled throughout the venue. The Enzo Enea Garden, adjacent to the building, was open for those who wanted to enjoy the cool November breeze, and refresh themselves with Ron Atlantico cocktails. As the evening ensued, everyone’s attention was further captivated with surprise ‘cirque’ performances by Animate Objects. 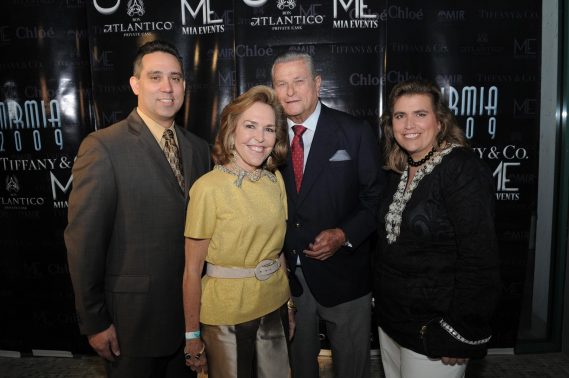 The charismatic Stephanie Sayfie-Aagard, popular society column guru, then took over the stage as she presented a short film that documented MIR Charities Corporate efforts with moving testimonials from recipients in the Dominican Republic. Stephanie also led a vivacious live auction with an exclusive home cooked meal by celebrity Chef Michelle Bernstein up for grabs, which was awarded to Oblio and Barry Wish of Palm Beach with a final bid of $7,000. Closely following suit, Lian Fanjul and Henry Gonzalez joined Stephanie to present the 1st MIR Humanitarian awards to three loyal charity supporters that have greatly devoted their time and talent to MIR this past year: Jon Secada who created an original song for MIR titled “Let Me In”; Mildred Espinoza producer of the new MIR Corporate video that premiered that night; and Jerry Tiangco who has implemented new business development programs and various advance technological systems into the MIR vocational schools and offices in the Dominican Republic. The glam factor then catapulted once again, as those present were privy to the first and never-before-seen Hannah MacGibbon Collection for Chloe, during an exclusive fashion show featuring her 2010 Spring line. 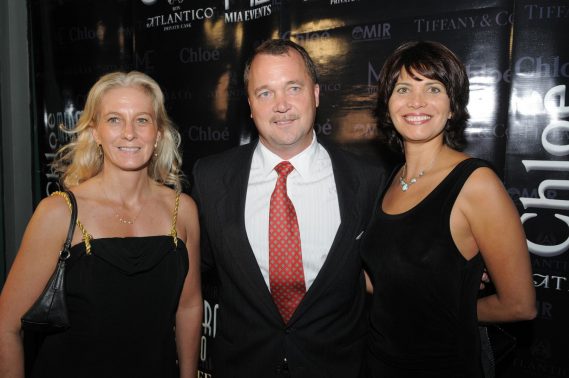 Home Miami & Home Ft. Lauderdale Magazines’ interactive design competition “Make Room Miami” was conducted on the second level, with interior design competitors in the likes of Hernan Arriaga, Emilio Robba, Nathan Galui from this season’s Design Star on HGTV, Stephanie Frantz who won second place and Grand Prize winner Z Style Deco, which was awarded a full page ad in the magazine, valued at $4,000. Event attendees served as judges for the night by marking their fave selections on ballot cards dispersed within the design spaces and at surrounding bars. All votes were tallied at the end of the evening, with Home Magazines’ Editors: Beth Dunlop, Editor in Chief, Megan Aquilina, Managing Editor, and special guest judge John Marquette of 4141 Design also casting their votes. 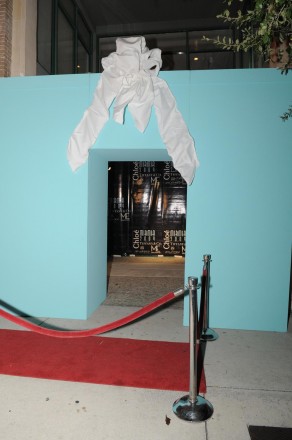 A luxury silent auction was ongoing throughout the vibrant festivities in the Garden Design Atrium, which boasted items like Casa de Campo first rate vacations, Tiffany & Co. jewelry and original works of arts, as well as VIP sports packages on behalf of the Florida Marlins and the World Series Champions, the NY Yankees. As if that wasn’t enough, a grand prize drawing was conducted, in which a lucky attendee, selected at random, won a $2,000 shopping spree at Tiffany’s. Once the program concluded, the DJ turned up the volume and cocktail hostesses flooded the room holding champagne bottles with sparklers for all to toast and mingle till the wee hours of the morning. 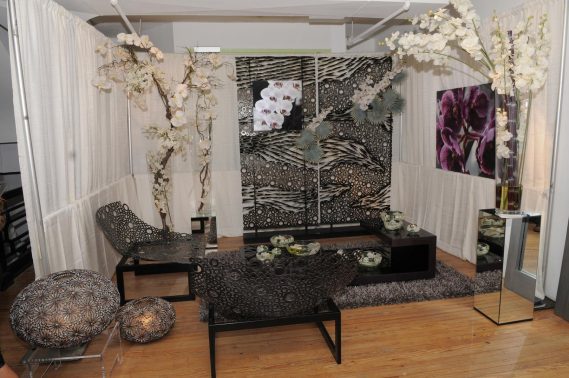