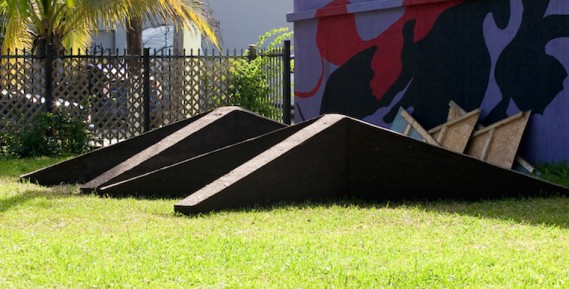 Dorsch Gallery artist Ralph Provisero will produce a new “rammed earth” installation outsidethe James Hotel’s Royal Palm for the Untitled Art Fair and Dimensions Variable December2012. The work will be titled Radiusramp, and will consist solely of compressed Everglades topsoil.
The first of his rammed earth works was done in 2008 for the exhibition, Yardwork at Casa Lin, an old house-turned-exhibition space in Miami’s Wynwood Arts District. The work was made using old-world techniques of compressing soil into a form until solid. Once removed from the forms, the work has a clear relation to minimalism and earth art of the 1970s, at once referring to historical and contemporary architectural and ecological conditions.
Provisero revisited the idea in November 2011 for an installation at the Dorsch Gallery’s, 20th Anniversary Party. Titled XX, two X-shaped rammed earth forms were created to depict the Roman numeral 20 visible in satellite view through Google Maps. It remains a year later, its sharp corners naturally softened by weeds and weather.
Ralph Provisero holds an MFA from the University of Miami and a BFA from the Kansas City Art Institute. He has exhibited extensively nationally and internationally at such venues as the Martin Z. Margulies Collection, the Museo de Arte Contemporaneo Ateneo de Yucatan, the Bass Museum and Chicago’s Navy Pier. In March 2012, he curated Wedding Crashers, a group exhibition at the historic Deering Estate in South Miami-Dade. Part of the Lowe Art Museum’s permanent collection, Provisero’s large-scale sculpture Pietra Veloce resides at
the center of the University of Miami’s Coral Gables campus.
His work is part of numerous notable collections, including the Margulies Collection and the Jerry Herskowitz Collection. He has exhibited at Dorsch Gallery since 1999.