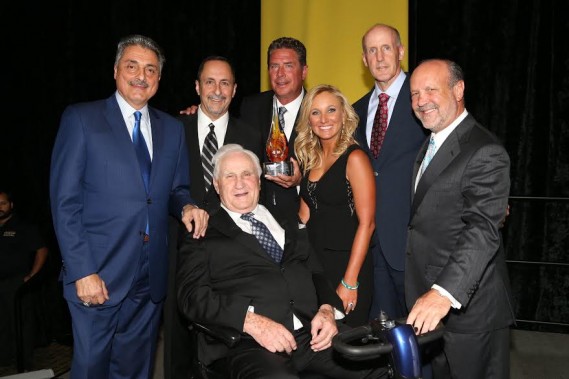 Sun Sports HEAT TV broadcasters and two of South Florida’s leading sports media personalities, Eric Reid and Tony Fiorentino celebrated the seventh annual Reid & Fiorentino Call Of The Game Dinner Hosted by the Seminole Hard Rock Hotel & Casino on Saturday, March 28th, alongside today’s sports icons and philanthropic heroes of our community, and with two of the most celebrated local charity organizations and beneficiaries – Lauren’s Kids and the Dade Schools Athletic Foundation. The evening event once again attracted some of the region’s biggest names in sports and entertainment while honoring the achievements by some of the today’s most acclaimed community leaders.

Miami Dolphins Hall of Famer and arguably the most celebrated quarterback in the history of the NFL, Dan Marino, accepted the evening’s most prestigious accolade in front of a star-studded capacity crowd, that included Miami HEAT coach Erik Spoelstra, Udonis Haslem, Alonzo Mourning and Miami Dolphins Coach Joe Philbin. Legendary coach Don Shula, was introduced on to the stage by Tony Fiorentino to give a moving tribute and introduction to the legendary Miami Dolphins quarterback, before Coach Shula, Fiorentino and Coach Philbin presented Marino with The Don Shula Sports Legend Award. Marino was honored for his achievements on the field and for his work in the community with The Dan Marino Foundation he established in 1992 with his wife Claire for treatment programs serving children with neurodevelopment disabilities.

“Thank you for this award, but the real hero in this community is Lauren,” Marino said, as he looked towards Lauren Book on-stage. Past winners of the Don Shula Sports Legend Award include inaugural honoree, Coach Don Shula, as well as Bob Griese, Dr. Jack Ramsay, Alonzo Mourning, Ron Rothstein and LeBron James.

For the fourth year, and to commemorate the legendary broadcaster, Jim Mandich, The Jim Mandich Courage and Commitment Award was presented to the inspiring local basketball coach Jeffrey Fogel, who made a moving acceptance speech on-stage after being introduced by Tony Fiorentino alongside Gil Green and Udonis Haslem, producer and featured NBA player in the film “Who Is Lou Gehrig?” Born and raised in North Miami Beach, Jeff has been working with kids as a counselor and coach for over 20 years at the Michael-Ann Russell JCC in North Miami Beach. In February 2012, Jeff was diagnosed with ALS, or Lou Gehrig’s disease, and he no longer has the use of his arms and now relies heavily on a wheelchair.  To honor their father, whose name the award commemorates, Jim Mandich’s three sons – Michael, Mark, and Nick took to the stage before Fogel called upon a number of girls from his basketball team at The Michael-Ann Russell Junior College to join him on stage to accept the award with him as well.

“You can give me all the medication in the world, but these girls are my true drug,” said Fogel.

Past Jim Mandich Courage and Commitment Awards have been presented to Nick Buoniconti and Marc Buoniconti for their outstanding work with The Miami Project to Cure Paralysis and CNN correspondent, Sara Ganim, for breaking the story on the Penn State sex abuse scandal. Last year’s award was presented to Arizona Congresswoman, Gabrielle Giffords, for her heroic survival, recovery and advocacy as a result of being shot in 2011.

The 2015 Reid & Fiorentino Call of the Game Dinner also featured an exceptional live performance on-stage by recording artist, Phylicia Ross, a silent auction throughout the evening, and a live auction presented by the annual auctioneer and FOX Sports’ Miami HEAT analyst, Jason Jackson.  All proceeds raised throughout the night benefit Lauren’s Kids and the Dade Schools Athletic Foundation.