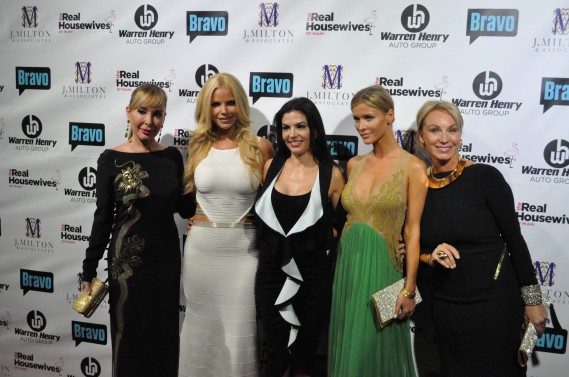 The ladies of the 305 sizzled as they graced the Bravo carpet in classic and jaw dropping fashion from Tom Ford, Valentino, Stella McCartney, Emilio Pucci, Herve Leger, Givenchy to an eye popping Reve by Khushali Kumar gown worn by Joanna Krupa.

For the reunion, there was a united front from current and released cast members. They all posed for photos to celebrate the survival of their show. However the division and tension were obvious as they parted ways to give their respective interviews with the local media. Lea Black and Joanna closer than before while Marysol Patton, Adriana De Moura, and Alexia Echevarria kept their corner. 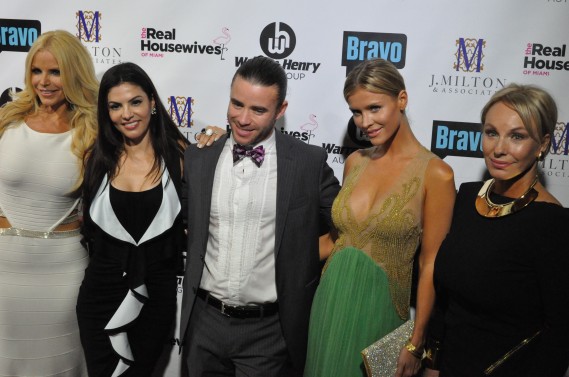 Even though the rivalries were real, it was just not enough to keep a high rating. So season two came with character changes. Cristy Rice and Larsa Pippen were replaced with Ana Quincoces, an attorney; Joanna Krupa, Polish model and former Dancing With the Stars contestant; Karent Sierra, a dental surgeon; and Lisa Hochstein, former model and current wife of Miami’s plastic surgeon, Dr. Lenny Hochstein; also with cameo appearances from Elaine Lancaster. At the end of season two the ratings remained low, again threatening the survival of the show. 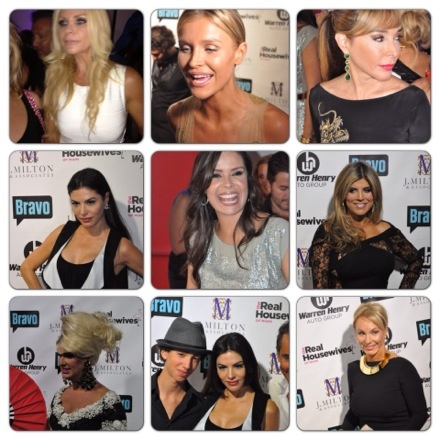 Yet again, Bravo spruced things up with major changes for season three. Marysol Patton and Ana Quincoces roles are reduced to part time or “friend of the show” status, while Karent has been eliminated altogether. The RHOM is back with fewer cast mates and more focused storylines around Lea Black, Alexia Echevarria, Lisa Hochstein, Adriana De Moura and Joanna Krupa which promises to be more exciting than seasons past. Boobs, funeral, catfights, wedding bliss are all highlights of the RHOM season 3. 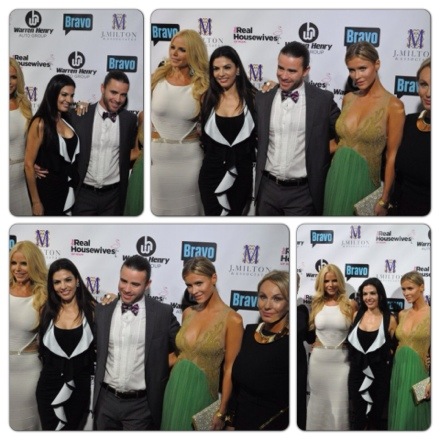 The Housewives franchise is all about drama, and in order to survive and stay afloat like Real Housewives of Atlanta, New Jersey and Beverly Hills, Miami has had to bring their ‘A’ game. Expect a roller coaster of drama in Season 3 from makeups and breakups, nuptials battles, boob exposures and more. It’s Gringas versus Latinas and Brazilian Bombshell versus Polish princess.
“People are going to be on the edge of their seats. There are going to be a lot of things that are unexpected,” Ana, a friend of the show and former housewife shared. “From the previews alone, there are certain behaviors that are inconsistent with some other people’s personality. Clearly everybody is letting it all hang out.”

In upcoming scenes, relationships are tested. And it appears Lea Black and Joanna have formed an alliance alienating long time gal pal Adriana. The great friendship between Lea and Adriana will be challenged. “Instead of supporting me they are against me,” Adriana shared. “I don’t understand, sometimes you think you know someone then they show you a side you’ve never seen. I am disappointed.”

Though it appeared by the end of season two they have burned through feuds over a bonfire flames, those flames were not fully oust resulting in the “Battle of the Brides.” 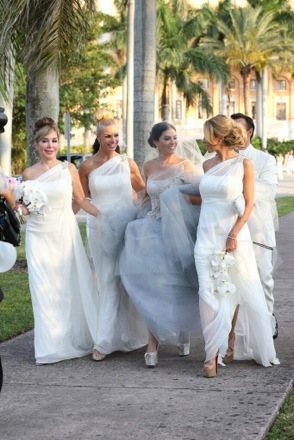 Lisa Hochstein and Elsa were the obvious absentees from the party. According to Marisol, Elsa was recovering from an illness and wanted to stay home. Lisa on the other hand was partying away in Ibiza-Spain (Mallorca, Palma, Ibiza). Apparently, Dr. Lenny, Lisa’s husband had scheduled their vacation months before the series premiere dates were set. However, the dates conflicted and there was no flexibility in rescheduling. 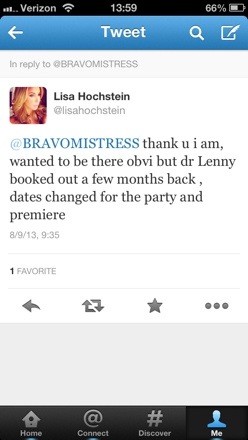 “Wanted to be there, obvi but Dr. Lenny booked out a few months back, dates changed for the party and premiere,” Lisa shared during a Twitter communication with @BravoMistress. 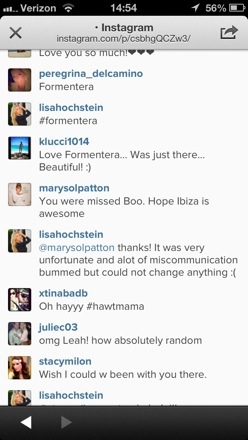 Later she shared her regrets with Marysol in an Instagram message. “It was very unfortunate and a lot of miscommunication, bummed could not change,” she shared. 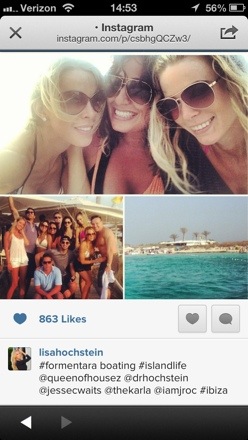 She seemed to not have missed much as the party in Ibiza was a blast. “Enjoying Ibiza,” Lisa shared. 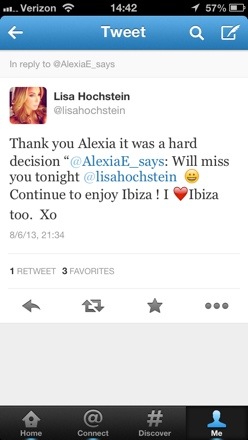 However, back in Miami the party continued as the women of the RHOM worked the red carpet revealing fashion secrets and show drama. 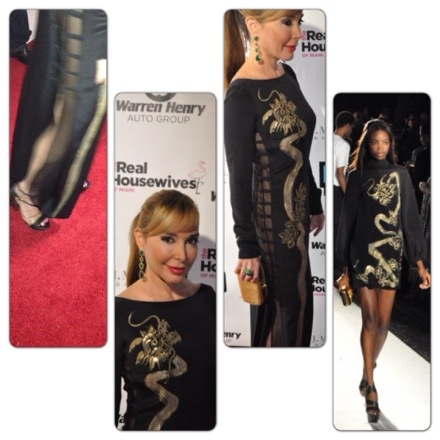 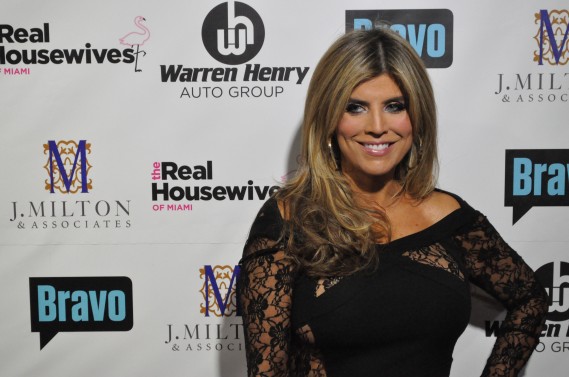 Ana Quincoces who looked smashing in a black open back Stella McCartney showed support from her friends. And she was not mad about her limited appearances on the show. “Marysol is in the show more than I am,” she said. She expressed the reason why she was no longer on the show as a main cast. “I think they probably thought there should be fewer housewives. This way they can fully delve into their lives; plus I had a lot of things going on outside the show,” she shared. She recently made the TV circuit with appearances on ABC’s The View and The Chew. 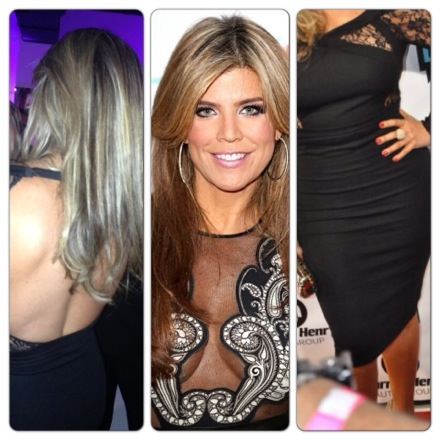 Bravo’s ‘friend of the show’ category did not leave her bitter and angry. Instead she embraces the changes and is very grateful for the opportunities the show offered her. “I am trying to explore other avenues. This have been an amazing platform for me, she said. As for that tiff she had with Thomas Kramer on Star Island, “I would never give him the opportunity to apologize,” she said.

As you may recall, in season 2 Ana had a hard time cutting ties with her ex-husband whom she had been with for over 23 years. Now she has moved on with a new family and a new man in her life. “I have been in a relationship for close to two years with a wonderful guy who wants nothing to do with the show. Between us, we have five amazing daughters. I found my prince charming,” she revealed.

Though her ex is no longer in her life, he has been totally gracious and supportive of career. “He is not jealous and really supportive. It didn’t work out for us, but we had 23 years together and he has been nothing but supportive, she said. 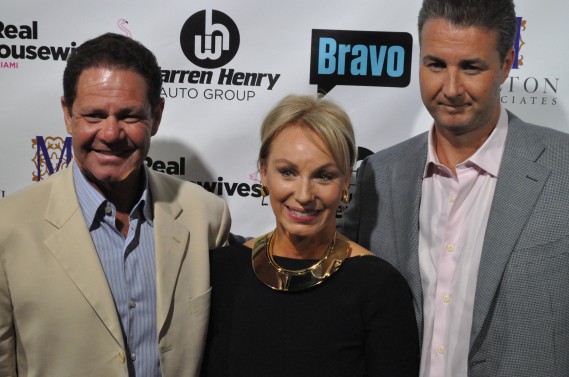 Bethany Frankel, Nene Leakes, Teresa Giudice are all successful housewives who have used Bravo as their launch pad to a rocking career. Miami’s serial businesswoman, Lea Black has always highlighted her star-studded Blacks Gala on the show. However, this year, she will take a page out of the other women’s books to introduce “Lea’s World” of accessories and skincare products.

“I have used all my own products since the mid-80s,” Lea told Premier Guide Miami. 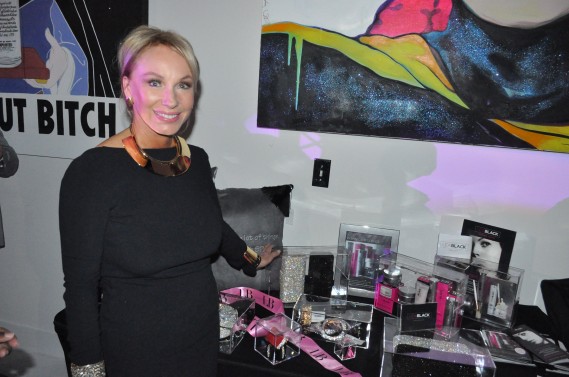 For over 20 years, Lea has developed and used her own skincare line of products which were on display both on her skin and at a display table set up among the luxury automobiles and fine art exhibition by artist Leonardo Hidalgo, inside the venue. Adorned in a stunning black open back Tom Ford dress with a gold clutch from her accessory line, she worked the room shamelessly. “Lea Black skincare since the mid-80s,” she shared. “It has been good to me.” 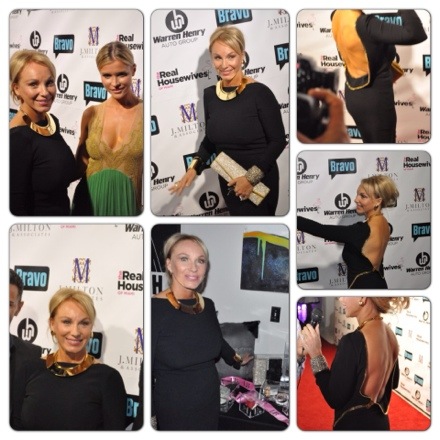 Alexia Echevarria, the Cuban Barbie has a reputation to live up to. And at the premiere, she was muy caliente, she definitely brought the spice. The Venue Magazine owner had the right attitude. She was all smiles as she walked the carpet in her white form-fitting Herve Leger dress with cutout sides revealing some skin and an amazingly flat stomach. “I am on a show with four other skinny bitches, so I can’t eat,” she confessed. 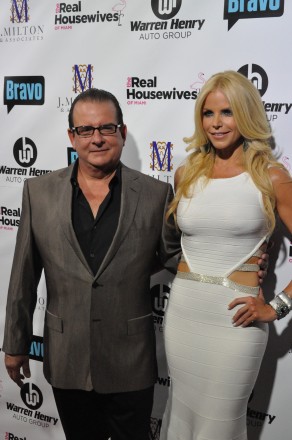 The housewife and mother of two attributes her slim profile and super flat stomach to her abstemious diet and nonstop attitude towards life and work. “I don’t stop. I have a crazy life and my strategy is to keep busy all the time. I don’t have time to think about anything else,” she shared. 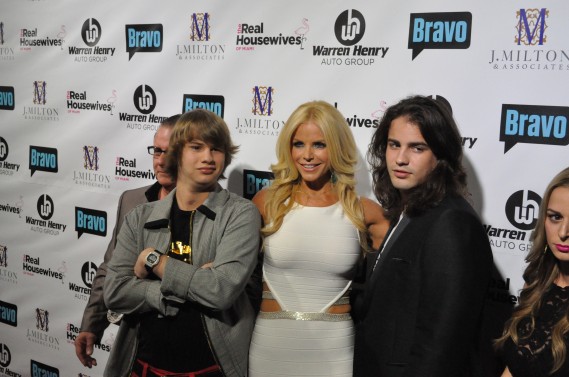 Last year was a difficult year for the housewife whose younger son, Frankie was involved in a near-fatal car crash. Taking time off from the show allowed her to care for him during his recovery. Now she’s back as a main character and expressed her gratitude to her support team and fans. Now that Frankie is improving, she is much happier. “I am in a much better place now,” she shared with us. 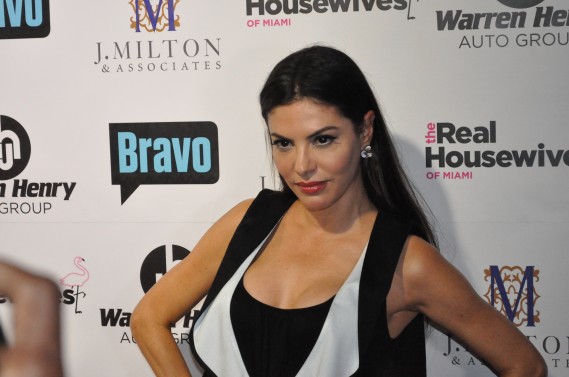 Always life of the party Adriana arrived as bubbly as a bottle of her favorite champagne, Perrier-Jouet, Belle Epoque. She had a certain glow about her, of course, she’s happy. In a flirty black-and-white Givenchy dress, it was hard to ruffle this Brazillian beauty’s feathers. With Joanna on one side, Adriana on the opposite side, she worked the photographers and local media as if the spotlight was all on her. After all it was. When asked about her glow, she said, “It’s love.” 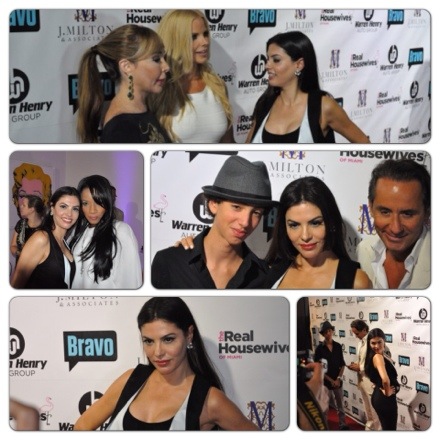 There is a lot of heat in this Brazilian Bombshell’s blood and before the premiere, it was just too hot to keep her clothes on. She recently posed naked for PETA (People for the Ethical Treatment of Animals) in support of Lolita, an orca who have been in captivity at the Miami Seaquarium since 1970. Her involvement has garnered a lot of attention for the housewife, one she relishes and welcomed. 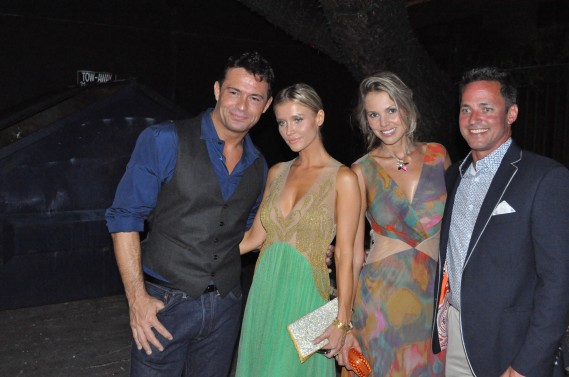 Joanna Krupa stole the spotlight wearing a green and gold gown by Reve by Khushali Kumar with a plunging neckline revealing her modeled assets. Arriving with Mynt nightclub owner, Romain Zago, the newlyweds looked fresh and flawless. The Polish model and her hubby sizzled as they posed for the cameras and discussed the show. 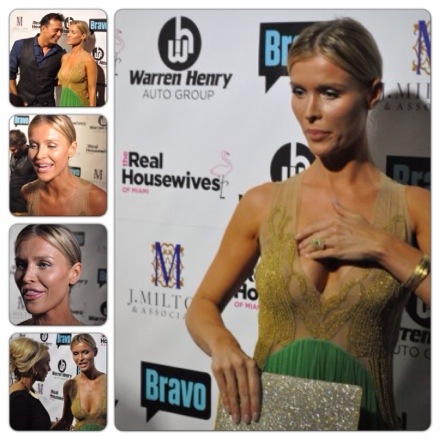 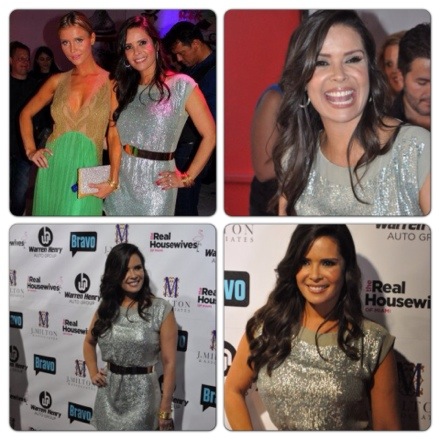 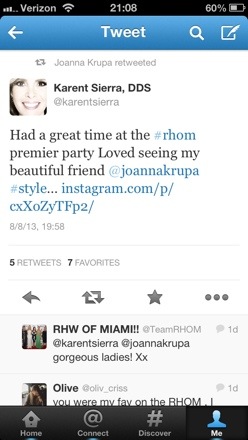 Last season, the women were wretchedly unfriendly to Dr. Karent, so we were not expecting her to attend the party. RIP Dr. Karent, well not quite. Even though the social dentist was released from the show, she has used this platform to her advantage. Catch her making appearances on the ABC’s medical show, The Doctors offering professional advice on your pearly whites. She also remains close friends with Joanna. “One of the best things that came out of me being on RHOM, was my amazing friendship with Joanna Krupa,” Karent shared on Twitter. 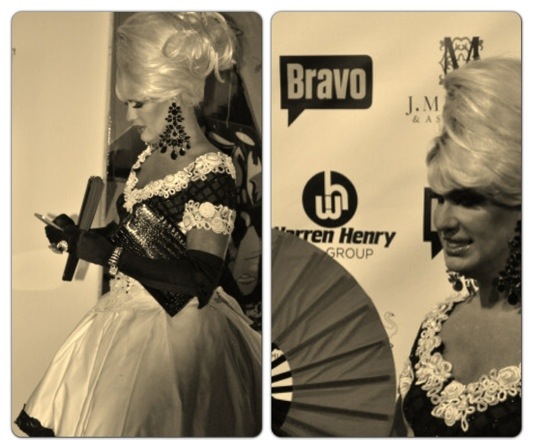 And how could one forget the ‘Queen Bee’, Elaine Lancaster. Of course, she was the first one to walk the carpet parading in her black and white vintage Valentino gown with custom-made earrings. She alluded to more drama, but no pool baptismal this season. “Don’t dear cross me, or else…” then sashayed away.

Love them or hate them, the Real Housewives of the Magic City has defied the odds and are back to prove, they will not go down without a fight. To date, this is the most successful reality series of Miami and we hope to see more from the ladies of the 305. 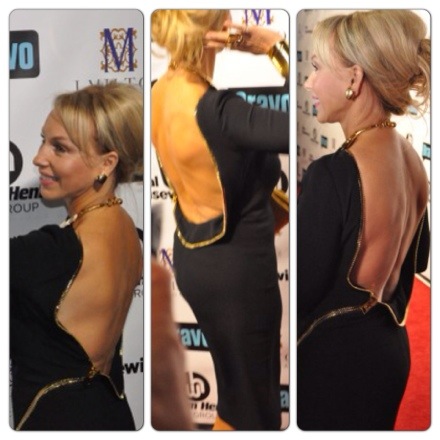 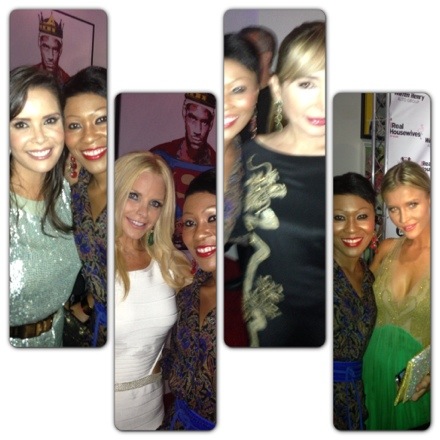