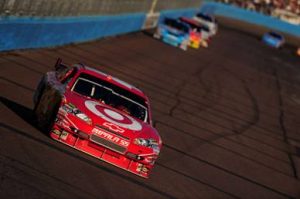 “We normally run pretty good there.  It is always a fun weekend because there is no pressure.”

South Florida resident Juan Pablo Montoya will participate in tomorrow’s Sprint Showdown in hopes of driving his way into the second All-Star Race of his NASCAR Sprint Cup Series career. The driver of the No. 42 also can earn a spot in the race as the fan-vote winner. To vote, text “vote” to 7777 on your Sprint phone or visit NASCAR.com. Voting ends one hour prior to the NASCAR Sprint All-Star Race, scheduled to start about 8 p.m. (EST) Saturday night.

For this year’s All-Star race, votes sent by Sprint customers via text were to count twice. And according to the NASCAR title sponsor, the brash Colombian—perhaps aided by his more than 145,000 Twitter followers—entered All-Star week a Top 5 vote-getter in the fan vote.

“The way I look at it, it is good practice for the week after,” Montoya said.  “If we get in, good; if we don’t, we have to really focus on the [May 30 Coca-Cola 600] and get some points for the Chase. That is the most important.”

Montoya and all of NASCAR’s elite will take part in the Sprint Showdown Saturday night (7:30 p.m., SPEED), followed by the All-Star Race itself. The next points-race stop for the Sprint Cup contenders is Charlotte on Sunday, May 30 (5:45 p.m., FOX TV), for Race 13 of 36 en route to crowning the Sprint Cup Champion in Miami Nov. 21. Tickets to see NASCAR’s Champions crowned this fall in Miami go on sale July 3; for more information, stay tuned to THEChampionshipTrack.com or call (866) 409-RACE.