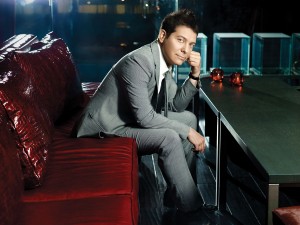 The Adrienne Arsht Center for the Performing Arts of Miami-Dade County presents the inaugural concert of the 2010-2011 JAZZ ROOTS: A Larry Rosen Jazz Series – AMERICAN SONGBOOK on November 5, 2010 at 8 p.m. in the John S. and James L. Knight Concert Hall. The program will spotlight two of the premier interpreters of American popular song – five-time Grammy-nominated entertainer Michael Feinstein and multi-Platinum recording artist Ann Hampton Callaway – singing the music of the greatest 20th Century songwriting icons who created the unequalled body of work globally-celebrated as The American Songbook. These two venerable artists will bring to life the most beloved songs, show tunes, and jazz standards by Berlin, Ellington, Gershwin, Kern, Mercer, Porter, and more.

Heralded by Quincy Jones as “the most important new concert and educational jazz series in America!,” JAZZ ROOTS: A Larry Rosen Series has been a major success, selling out its first two seasons in the Adrienne Arsht Center’s 2,200-seat Knight Concert Hall, and the series continues to defy expectations.

“We are thrilled to present the Adrienne Arsht Center debut of Michael Feinstein – ‘the Ambassador of the Great American Songbook’ – in concert in Miami for the first time in more than six years, who will be joined on stage by the multi-talented Ann Hampton Callaway. Both artists have been instrumental in keeping our rich American musical heritage alive, through their international performances, recordings, and public television shows,” said M. John Richard, president and CEO of the Adrienne Arsht Center. “This performance offers the South Florida community the opportunity to embark on a musical journey through the history of American song as they listen to some of the most treasured tunes in American music performed from the stage of the Knight Concert Hall.”

No singer today is better identified with the American Songbook than the Platinum-selling, five-time Grammy-nominated Michael Feinstein. A vocalist, pianist, TV personality, preservationist, and educator, Feinstein defines the genre. He has performed at the world’s most prestigious venues, including Carnegie Hall, The White House, and Buckingham Palace, and is internationally recognized for his commitment to American popular song, both celebrating its art and preserving its legacy for the next generation. Feinstein’s three-part documentary series, Michael Feinstein’s American Songbook, in which he travels around the world to discover rare artifacts relating to classic American music, premieres on PBS in October 2010. His latest CD, Fly Me to the Moon, is being released in conjunction with the PBS series.

Beginning in 2011, his collection of rare memorabilia and manuscripts will be housed in a new museum at the Carmel Performing Arts Center in Carmel, Indiana, where he will also serve as Artistic Director. Last spring, Michael Feinstein starred with Dame Edna in the new Broadway show All About Me, and this year he also took over as Director of Jazz and Popular Song Series at New York’s Lincoln Center. He has written the score for two upcoming stage musicals: The Night They Saved Macy’s Parade and The Gold Room. Currently, he is developing The Thomas Crown Affair into a Broadway musical and scoring his second movie, The Big Valley, starring Susan Sarandon, as well as writing a new book about the songs of the Gershwin brothers and co-producing a movie about them with Oscar and Tony-winning producer Marc Platt. As the assistant to lyricist Ira Gershwin for six years, Feinstein earned access to numerous unpublished Gershwin songs, many of which he has since performed and recorded. Feinstein also serves on the exclusive Library of Congress’ National Recording Preservation Board, safeguarding the conservation and increased public availability of America’s sound recording heritage.

Ann Hampton Callaway’s gifts as a singer, pianist, composer, lyricist, actress, TV host, and educator have given her one of the most unique careers in music today. Her singing style seamlessly blends jazz and traditional pop, making her a mainstay in concert halls, jazz clubs, and theaters. She is best known for starring in the hit Broadway musical Swing!, for which she received a Tony nomination, and gained international exposure for writing and singing the theme to the popular TV series, “The Nanny.” A favorite on the jazz and pops concert circuit, she performs with jazz legends Ramsey Lewis and Michael Feinstein, and is featured at many Carnegie Hall tribute concerts. Callaway’s songs are featured on five of Barbra Streisand’s recent CDs, and her live recording from her award-winning show at London’s Donmar Warehouse, Sibling Revelry, with Broadway star and sister Liz Callaway, has garnered rave reviews.  A devoted keeper-of-the-flame of the great American Songbook, Callaway has the unique distinction of being the only composer to have collaborated with Cole Porter. She set her music to his posthumously discovered lyric, “I Gaze in Your Eyes,” and has also produced and hosted two specials for public television entitled Singers Spotlight, with guests Liza Minnelli and Christine Ebersol. Her numerous honors include a Tony nomination and Theatre World Award for her work in Swing!, 14 Mac Awards, and The Johnny Mercer Songwriter Award.

JAZZ ROOTS also features an in-depth educational partnership with Miami-Dade County Public Schools which will bring more than 900 music students to the Center for a unique behind-the-scenes experience, including a pre-concert sound check and a Q&A session with featured artists followed by a workshop with a local jazz expert that will highlight the music, the artistic process and the practical skills needed for a career in the arts. In addition, the Center has developed a curriculum which will be distributed to 800 music, English and social studies teachers throughout the MDCPS school system, potentially serving 24,000 children.