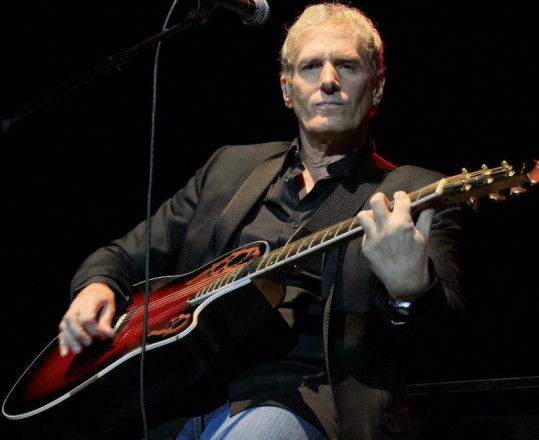 Time-love-tenderness; it takes time for people to fully appreciate good music, love for their craft to weather the ups and downs, and to develop tenderness or charisma, if you will to have a devoted fan base and following as Michael Bolton.

I have followed Michael’s career over the years through his transformation from the curly locks he sported in the 80’s to the sexy short do that fits his profile now. At age 60, his voice is more mellow and he has become a smooth entertainer.

I have always adored the entertainer, since I became a young fan growing up in Jamaica. As far back as I can recall, I have always listened to his music. When I heard he was headed for South Florida, I was very excited, I wanted to see him again in concert.

As a regular to the Jamaica Jazz and Blues Festival, I was fortunate to have seen him perform several times, and he always demonstrated good showmanship. In my opinion, he performs best in an outdoor setting, and he was at his best then. Jamaica loves Michael Bolton, and Michael loves Jamaica. Then, he fed off the crowds energy and mesmerized the audience with some of his greatest hits, anthems and ballads we continue to love today.

However, that enthusiasm in his performance was lacking at the Hard Rock Live in Hollywood, Florida during his 115 City Tour in December 2012. Although the artist has a tremendous collection, somehow he did not perform the best of them. Unfortunately, he did not fully satisfy as we anticipated.

The veteran musician’s songs have been the soundtrack for many joyous moments of his fans lives, from weddings to christening as well as new love and messy breakups.

When he sang, we yearned for more but when he interrupted the concert to introduce a member of his accompanying talent, Kelly Levesque, a female singer who acts as a back-up performing solos of female artists who have collaborated with Michael in the past; we were disappointed. Not that Kelly was a bad singer, instead, we wanted to hear and see more of Michael. Other audience members were distracted by the blonde bombshell’s appearance. Some screams, applause and whistles was a nod of approval. “They approve, it’s a good thing,” says the Grammy Award-winner and former Dancing With The Stars contestant.

Kelly delivered a medley of hits performed by Barbara Streisand, Cher and Kiss which included, “We Are Not Making Love Anymore,” “I Found Someone,” and “Forever.” At times it felt like it was a Michael and Kelly show, not Michael Bolton’s show as billed which left many fans disappointed and frustrated.

While growing up in Connecticut, Michael enjoyed and loved the blues. Then, his older brother played a lot of music for him which later inspired him to get into the business. Kenny G was also in the audience to show his support. He did an experimental solo guitar piece which was not terrible, but we would recommend that he sticks to writing and singing. “It’s not that kind of show,” he joked later.

Music is his passion, and he is not limited in his ability as a performer to experiment with all genre of music such as Pop, Rock which he has proven time and time again by collaborating with today’s top artists Kanye West and Lady Gaga, among others. Pop, Rock and R&B all served as a base throughout his musical career.

Throughout the show, Michael had several wardrobe changes from GQ to casual cool. In his absence members of his team filled in. One memorable moment happened when Copenhagen native, Michael Lington, a saxophonist performed a solo, “You and I” which left the audience in awe.

When Michael returned to the stage, he apologized for what he thought was a lengthy break for a wardrobe change from jeans to suit. “Would have been here sooner, but they put my suit in Miami,” he joked.

“I love my job,” Michael shouted from the stage. Before he became a household name in the 80’s, he was writing songs for other artists to support his family. “This was how I put food on the table.” He continued, “Food is good.” He kept it brief as it was a very emotional matter for him. Lady Gaga, Kanye West, Laura Branigan and a host of others have performed songs written by Michael demonstrating his range and talent as a musician.

Although he has worked with some of the world’s best talents, he was terrified when the late opera singer, Luciano Pavarotti invited him to sing with him. “Pavarotti was gracious with me, he helped me with my Italian.” This was a life altering experience for Michael. With that said, he belted out a spellbinding performance of Pavarotti’s signature aria, Nessum Dorma.

Despite the earlier frustration, by the end of the show Bolt-heads were pleased with Michael’s live performance. Finally, the soulful and seductive voice we have listened to for years over and over on the radio was seducing us from main stage.

The most satisfying moment of the concert came when Michael became the coolest kid on the block by venturing out in the audience greeting, touching and kissing fans. It was a real up-close moment which the fans loved. From a secondary platform planted in the middle of the audience, he performed “When A Man Loves A Woman.” That was a real thrill for everyone.

The old school crooner and charismatic powerhouse covered a select range of his career hits from his 17 studio albums including Bob Dylan’s “Make You Feel My Love” from his 2011 Gems: The Duet Collection. “I feel fortunate to have worked with amazing composers like Adele, David Foster and Bob Dylan,” he said.