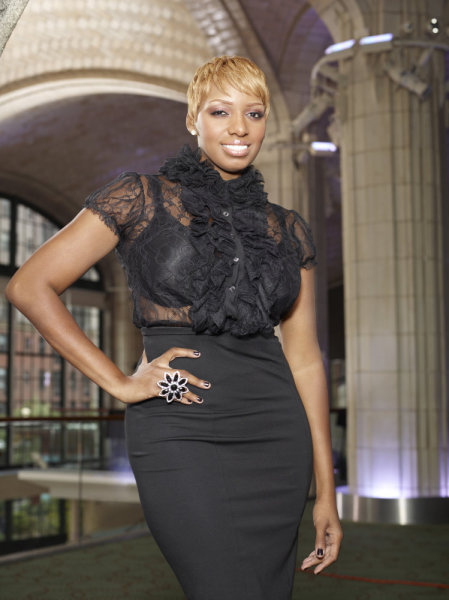 The Real Housewives of Atlanta star, and now season 11 Celebrity Apprentice contestant, Nene Leakes is keeping it real. Known for her in-your-face, no BS attitude, Nene will compete amongst fifteen contestant to raise money for their favorite charities. However, before the show premieres, there is buzz about the internet about a never ending feud between Star Jones and Nene.

With only a few days before the premiere, I caught up with Nene Leakes who discussed why she is being compared to Omarosa, her relationship with the women on the show, including Star Jones, why Mr. Trump thinks she will be a big star and why she feared the Donald before the show.

“The Celebrity Apprentice,” premiering on Sunday, March 6th at 9pm EST/PST. And airs every Sunday.

What was your reason for joining The Celebrity Apprentice?

NeNe Leakes: I was asked last season to join and I said no. And this season I decided I would do it this season. I was scared to join. I definitely had hesitation. I was afraid first of all of course everybody’s afraid of Mr. Trump. I thought mean loved everybody with that face and no smile. And I just thought I wasn’t going to be able to be smart enough to do this whole thing. And so I had hesitation. And after talking to the producers of the show I decided that I was going to go ahead and give it a shot. And I’m glad I did.

Nene were you prepared for the hectic schedule on the show?

NeNe Leakes: Yes I really thought that I was prepared because I shoot a reality show and we shoot for months. But the schedule was very hard. It really was. Everybody was getting sick and the long hours. It’s a tough schedule. It was a grueling schedule for me because I just left the Housewives filming and went straight into Celebrity Apprentice and then I was going through a lot in my personal life. It was just a very hard schedule and a hard time for me.

What was your plan going in to the show?

NeNe Leakes: I had no strategy going in — nothing. I’m not a person who would plan something out. I don’t strategize. I just kind of walked in really blind. I just walked in and I thought to myself whatever happens happens. I’m just going to try to be myself. Whenever I’m walking into anything I always at the end of the day I want to be myself at the end of the day. So I had no strategy. I’m not good at backstabbing, like I’m not good at that. So I knew that would never work for me to be like backstabbing. I like to be very loyal to whoever I’m with. And there’s an experience I can’t really talk about that much but there’s a time in the show, I’m not sure if they’re really showing it or not but I know that I had loyalty to someone on – to a person on this show. And we talked behind the scenes and I had loyalty to them. And when they showed me their true self it really pisses me off. That’s all I can tell you. I had no strategy going in. I just walked in as NeNe and walked out as NeNe. I had no strategy. I met people on this show that I will probably be friends with and talk to for the rest of my life. Before – I knew some of the contestants before I got there. I knew who they were. And you’re thinking one thing and then you meet them and you find out something totally different. So there are people or contestants on the show that I will be friends with forever now. So that’s one of the reasons I’m really glad I did the show too, but no strategy.

What was your impression of Mr. Trump before going on the Celebrity Apprentice?

NeNe Leakes: Well I can tell you one of the things that I like about Mr. Trump was when I went into Celebrity Apprentice I was afraid of him. And I’m a tough girl. But I was really afraid of him before I ever even got into New York. And then once I saw him for the first time I was really kind of nervous. And really I don’t know if you remember this Mr. Trump but I didn’t talk very much. I just really didn’t know what to say in the front of him. And I didn’t know whether or not he was going to be real or not. And I can say now that I know that he’s very real. And I love the fact that he’s real and successful. It’s beautiful. You’re very real Mr. Trump. You’re very real. No phony. So now you can wear the little tag on your shirt that says Keeping it Real with Trump.

What was your relationship like with the women and Star Jones?

NeNe Leakes: I definitely came out with friends and enemies and I’m okay with it. I really am okay with it yes. Everybody knows that I get in Star’s face. I’m not afraid to get in anybody’s face. I will just have to say that. I’m just keeping it real with you.I will get in anybody’s face if they really push me there and take me there. I feel like I was pushed and taken there. And I do have – and I dance of course with Latoya and I sign with Marlee and we had some great time. We have highs and lows. And I went in just really being myself and just expecting whatever happens, happens. And so I’m going to have friends and enemies when it’s all said and done. But hell I’ve got friends and enemies now so it’s okay. Well I’m sure I’ll come out with enemies. I learned that I don’t really – I’m sort of hot and cold and I don’t have a middle. I’ve learned that about myself that I’m either this way or that way. I don’t have a middle. So I’m trying to work on having a little bit of a middle. I’m really, really cool or I’m really jumping off the deep. There’s no middle with me. And I’ve got to learn to have a little bit of a middle. And if I come out with an enemy I probably come out with at least one. Star’s got it in for me. We all know that right now. It’s all good though. I did not… You know what? I’m not – I’m okay with it though. I’m really, really okay with it. There are a lot of people that don’t like Star so I won’t be the only one. Plenty of people don’t like Star. I just don’t think Star it’s that she’s very different. She’s a piece of work honey. I can tell you that. Anybody that’s sitting around all day telling you all my friends are doctors, and lawyers, and A list celebrities, cut the phony bullshit with me, like I don’t have time for it. Let’s keep it real now.

Nene, it seems like you are the new Omarosa of the Celebrity Apprentice.

NeNe Leakes: I’m very passionate. And I think you will see that about all of the players when they talk about being volatile. We’re all very passionate about what we’re doing. I don’t like phonies. And that bothers me. So the moment somebody’s being phony I’m going to lose it. But the other thing that people don’t really know about me that you may know about me is that I really have a quiet and shy side. But I also can really come out and fight for what I believe in. So you’ll see all of those things. Oh my God cause I’ve heard that NeNe oh my gosh, are you making Omarosa look like an angel? I’m like oh my God.

Remember Omarosa Manigault-Stallworth, that mouthy “villain” from the first season of “The Apprentice”? Well, she’s now the Rev. Omarosa, having recently been ordained as a Baptist minister and begun her duties as the assistant pastor of a church in L.A.

Why do you think there was so much tension on show?

NeNe Leakes: I would have to say that every – you have a lot of people on the show this season that is very passionate. I mean they’re very passionate about their charities. We’re all very independent. I mean we’re our own stars and celebrities in our own mind. So you just have a group of very passionate people who believe in certain things. And we all believe something totally different. So I think it’s just the passion amongst all of us. Yes we’re very passionate. Meatloaf I know you were so passionate, oh my God. I was going to date you when all this is over but you were married.

What have you discovered about you after doing the show?

Nene on communicating with Marlee Matlin and learning sign language:

NeNe Leakes: It’s not easy. And she’s very entertaining. I will tell you this, I worked with Marlee a lot. And whenever she would sign I was so intrigued by it. She’s just interesting to watch when she’s signing. It’s so beautiful when she does that. I actually pretend to sign but I don’t know how to sign. She has a great sense of humor. She really does.

What do you think the outcome of you being on the show will be?

NeNe Leakes: I’m hoping that it takes me to a whole new level. Mr. Trump says he promises that it will. He said you’re going to be a big star after this. I really walked into the show kind of blind. I’m a little afraid. I’m a little scared with this season coming out. When I did the show I wasn’t going in to take my celebrity to anywhere. I was hoping that I didn’t get fired the first person. I was thinking just make it from first. Don’t be fired first. That’s all I thought about. It’s the only thing I thought about going in is just don’t get fired first. And it really became real then. And I thought this is real.