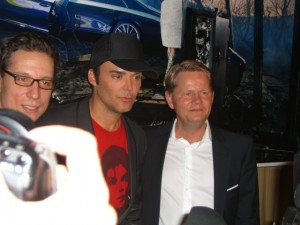 “They gave me the creative freedom to do whatever I wanted to do,” David La Chapelle told Premier Guide Miami.

Bliss amongst Chaos, appropriately named was a portrayal of the Maybach Zeppelin through the eyes of David La Chapelle. “I fell in love with the brand,” he says.

David La Chapelle, the internationally renowned, and one of the world’s prominent photographers, was inspired by the ultra luxury culture of the Maybach brand, hence collaborated with them to portray the limited edition, Maybach Zeppelin, for an exclusive unveiling during Art Basel Miami Beach 2009.

Maybach is a high-end luxury automobile with a price tag of US$450,000. When they were first introduced to the US, Sean “P. Diddy” Combs and Dr. Joseph Osho were among the few people who owned one in New York. The brand is becoming increasingly popular and will be seen throughout Miami, and many other main stages including the Super Bowl in 2010.

Executives at Maybach were impressed with the work David has done over the years where he managed to bring photography into museums to be displayed as art. The two photographs focused on the the Maybach Zeppelin Limited Special Edition and its historic predecessor from the 1930’s, the Maybach Zeppelin DS8. In both motifs there are elements representing chaos, like a burnt forest and nakedness, drunkenness and debauchery, yet from all those dark elements emerged this symbol of luxury and status.

Maybach continues its commitment to the arts and giving back to the community, a tradition that has catapult the brand to where it’s at today. As an orphan child, in Reutlingen, Germany, Wilhem Maybach(founder of Maybach) was nurtured and his skills developed under guidance from Gottlieb Daimler. Today Maybach continues their mentor programs through the Beyeler Foundation.

PGM: How did you manage to form this partnership with David?

PM: We are familiar with his exhibitions worldwide, so choosing David was easy. We chose each other. We were impressed by his work and he managed to bring photography into museums. He really went out into a class of his own. We feel Maybach and David are great fit.

PGM: Why have you chosen Art Basel Miami Beach for the unveiling?

PM: We traveled here last year to see if Maybach should go in this direction, and I was thrilled by the atmosphere last year. We were thinking about projects and it was a natural decision to have this world premiere of these pictures here at Art Basel Miami Beach.

PGM: What will you do with the pieces presented here?

PM: We will get these two pieces, and they will be shown at Maybach events. We will invite our customers and will invite David to be there. Our customers will have access to David and talk about his works of art. This is something for the future.

PGM: There is a great turnout here. How are people reacting to brand?

PM: The response has been overwhelmingly positive. We sent out the press release, and we had a major press response from it. It may be the biggest Maybach activity to have received this overwhelming response for the last year. The people here that I have talked to say maybe provocative but a progressive way to interpret the Maybach brand. The right way to forward that’s tapping into a new target group of people that have not have contact with the Maybach brand, so we are very happy.

PGM: A guest offered his opinion about the photographs, stating he is a bit bothered by the fact that Maybach, the luxury brand would be associated with such debauchery. What do you say to that?

PM: Well being critical about the display of luxury I can understand because luxury can be seen from different sides. The important thing is of course our customers, someone who can afford a Maybach, enjoys luxury. The good thing is , the vast majority of our customers are very aware of that, and they are very active in our foundations to do social activities, and so the Maybach brand has supported the Beyeler foundation, which we are the primary partner.

PGM: Tell us about the Beyeler foundation and Maybach’s commitment to this cause.

PM: From 2010 Maybach will be the official partner of the renowned Foundation Beyeler in Riehen near Basel, Switzerland foundation which we are primary partners. We are supporting young talents, not only in the field of arts but also in other fields where we try to connect them with mentors. The Wilhelm and Karl Maybach Foundation is also dedicated to this principle of supporting young and emerging artists through established mentors. In following in the same path, David La Chapelle is supporting the idea of patronage by providing the opportunity for an emerging photographer to share his experiences with him for a three months period in Hawaii – supported by Maybach. Like Wilhelm Maybach who has had a mentor to become the king of engineer, so we want to bring the story of the past into the current times. It can be seen controversial but supporting young talent is a part of luxury. I think that is a good one. Maybach has been supportive of the arts from the relaunch, for example, in 2005 Maybach supported the artist duo Christo and Jeanne-Claude with their sensational project “The Gates” in New York’s Central Park. After additional projects, in August 2009 this was followed by the presentation of the Maybach Art Cars – designed by Tim Berresheim. This is something that is important to us. If you made it to the top, you have to be able to send the elevator down to the people who are standing at the ground level to bring them up. That is the responsibility of big companies and especially of companies who are in the luxury world.

PGM: Will you return next year?

PM: We will definitely be here next year. 2010 will be a very important year for Maybach, also with the acceleration in the engagement of arts we will also be the official partner of the Beyeler Foundation. It is one of the world’s most renowned private collections which may be compared to the Rubell Family collection here in Miami. We will be in St. Moritz, we again will have events with David La Chapelle and these wonderful pictures. Next year is pretty packed already, but we will definitely think about the new highlights for Miami Beach next year.