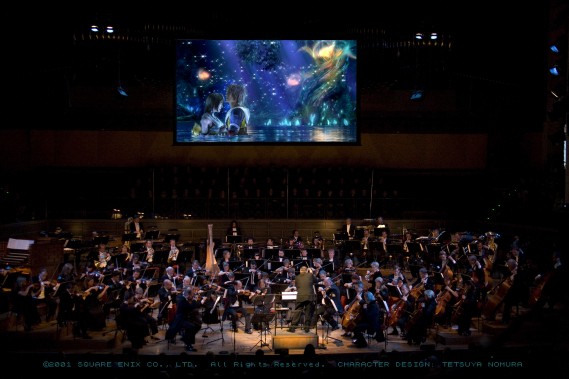 “Videos and art stills complement each musical selection and help to remind fans why we fell in love with the music in the first place!” – Game Informer

Uematsu’s music, hailed by TIME magazine’s Christopher John Farley for “…imbuing FINAL FANTASY games with grandeur and depth, much the way John Williams’ score helped propel ‘Star Wars’ into hyperspace,” is sweeping and richly atmospheric. Originally created to enhance the gaming experience of one of the best‐selling video game franchises in history, the compositions have garnered legions of fans of their own.

“As Miami’s home for the performing arts, the Arsht Center is proud to create new, collective experiences for the entire community through a wide variety of artistic programs. Last year’s stirring concert ‘The Legend of Zelda:  Symphony of the Goddesses’ successfully introduced many local video game fans to the Center,” said John Richard, President and CEO of the Adrienne Arsht Center. “With the South Florida premiere of Distant Worlds: music from FINAL FANTASY, we’re delighted to continue bridging the fantastical world of video games with the live performing arts.”

“While originally composed to set the tone for the FINAL FANTASY games, Uematsu’s music is as emotionally compelling and sophisticated as the work of any composer working today”, said Arnie Roth, who has held the baton for all FINAL FANTASY concerts in North America and Europe. “The breadth of his work is astounding, encompassing traditional orchestral and operatic work to pop-inspired ballads. To witness the overwhelming reaction of audiences – and even veteran musicians – to this music is a genuine thrill.”

With a massive ensemble of musicians on stage, Distant Worlds: music from FINAL FANTASY is a multimedia feast for the ears and the eyes. The concert’s unique multimedia experience combines thrilling screen images to match the soaring emotions of a symphony orchestra performing music from Square Enix’s world-renowned video game series.

Nobuo Uematsu is universally recognized as one of the most celebrated video game composers in the field, having achieved global recognition for his music from the FINAL FANTASY franchise that has been performed by world-class orchestras around the globe. Seen as a major proponent for and contributor to the increasing popularity of live performances of video game music, his song “Eyes on Me,” the theme song from FINAL FANTASY VIII, sold a record number of copies and was the first video game song to win “Song of the Year (Western Music)” at the Japanese Gold Disc Awards in 1999. The music from the game series has grown to such notoriety, Nobuo Uematsu was named as one of the “Innovators” in TIME magazine’s “Time 100: the Next Wave Music” feature.