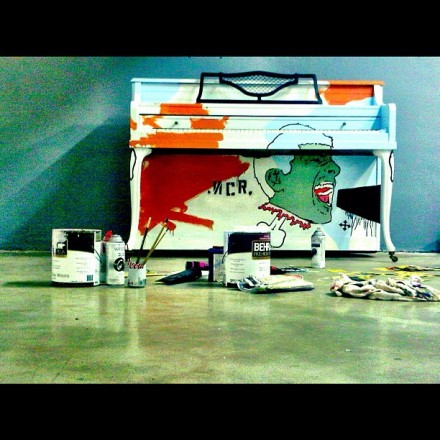 The Mixed Media Collective and PrintHouse USA are providing maps and other marketing materials. They will be popping up in several art-centric Miami locations in the coming months.

Each of the eight pianos will be crafted by artists at one of Miami’s iconic mixed-use arts complexes, Miami Iron Side. Miami Iron Side will also host a Pre-Art Basel Mixer where media and the community can view the almost completed pianos and meet the artists while savoring special delights such as tea tastings by Steep City Teas and sweets by Patty Cakes Cupcakes. Pearl Paint, the largest art supply store in the world that began on Canal Street, New York in 1933 as a family-owned company, will be supplying all the artistic materials for the following artists to create their masterpieces on the pianos:

Surprise locally acclaimed musicians will have “pop-up” performances that will be announced via social media outlets throughout the duration of the project. Art Basel week spectators will have access to tickle the ivories between scheduled performances by these talented musicians.

PUPM will host a fundraising concert on December 5 from 8:30PM – 11:30PM at The PERRY South Beach Hotel, one of Miami’s premier and chic hotspot hotels. The event will feature a performance by Yuna who is presented by Metro 1 with some surprise special performances. The concert line-up will be announced soon. There will be passed hors d’oeuvres courtesy of The One Group and cocktails courtesy of GREY GOOSE Vodka. Surrounding the highlighted performances will be one of Miami’s famed nightlife DJs, Yissel Cabrera A.K.A. DJ YSL. All of the finished pianos will be on view at the event before they are dispersed to the streets the following morning.

The event will also host a silent auction of unique treats and donated gifts from partners. Funds that are raised from the auction and tickets sales will be donated to Friends of the New World Symphony and Central Africa’s only symphony orchestra, Kimbanguist Symphony Orchestra, which was recently featured on CBS’s 60 Minutes.