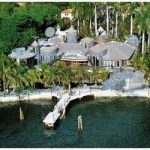 Once there was a man who built a castle on North Bay Road in Miami Beach. His name is Michael Burke Sr, the owner and founder of Windjammer Barefoot Cruises, a now defunct company he originally started in 1947. According to an article written in Cruisemates.com, “Captain Burke awoke one day aboard a vessel he didn’t recognize and was subsequently informed he had won it in a card game the night before. Captain Burke, known affectionately as “CB,” named it “The Hangover.”

I met Captain Burke many years ago, when he owned a house on Star Island, in Miami Beach. He asked me to find a house for his daughter, who was about to be married. I did that, and subsequently became friends with the captain, an eccentric man. A few years later Captain Burke decided to fulfill a childhood dream, and sold his Star Island property, and purchased a property located at 4462 North Bay Road in Miami Beach. It was there that he would build his castle.

North Bay Road is one of the most desired areas in Miami, because it has some of the finest homes in Florida, situated on large lots facing the wide bay, where the most beautiful sunsets can be seen night after night. Many of the homes on North Bay Road are mediterranean in style, and some are modern homes, which have been built in the past several years. The house located at 4462 North Bay Road, was neither mediterranean in style, nor was it modern; it was literally built to look like a dark castle. The inside of the house made me feel like I was in Disney World. As you entered the property through the front gates, there was a pond, but this was no ordinary pond. Inside were 9 fairly large sharks swimming around in plain sight.

I know all of this because Captain Burke asked me to sell the house for him about 6 years ago, and I listed it for the hefty price of $5,500,000. I did everything I could to sell that house, and showed it to many, many buyers, but I never did make the sale, hard as I tried. In March of 2007 it sold for $7,600,000, and in January 2009 it was recorded as a foreclosure, in the preforeclosure stage. Yesterday it burned down. Those are the facts. Is it strange? Does it seem odd? Was it an accident in a vacant house, a fire started by no one? Maybe time will tell.