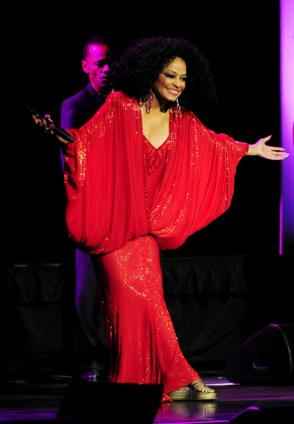 Diana Ross: “More Today Than Yesterday-Greatest Hits”
Singer and Academy award-winning actress | Lead singer of the Motown group The Supremes | Lady Sings the Blues | An Evening with Diana Ross | The Wiz (a remake of The Wizard of Oz)
By: Gary Sandelier and Daedrian McNaughton

Most of us who are familiar with Diana Ross know that she was once the lead singer in the all girls group, The Supremes who later left the group to pursue a successful solo career and a family.

In 2010, the legendary soul diva, Diana Ross embarked on a tour entitled,”More Today Than Yesterday-Greatest Hits”. A celebration and reflection of her greatest hits which spanned over 50 years in showbiz–a travel through the highlights of her career. Ross dedicated her 2010–11 “More Today Than Yesterday-Greatest Hits” tour to Michael Jackson. The tour took her to small and intimate venues throughout the U.S. culminating in early 2011. And she also made a stop at Hard Rock Live, Hollywood, Florida.

Gary and I arrived at the Hard Rock, about fifteen minutes after the scheduled time for the concert. Upon arrival we were stunned to find out that the concert was well under way and other concert-goers were rushing to take their seats. Now this would have been an unforgivable and unacceptable act by Ms. Ross as we have learned of at previous venues where she was not pleased with the tardiness of the fans.

The concert was more like a Vegas style show with constant costume changes reflecting each era of her music. In classic Diana Ross fashion, the gowns were dazzling in vibrant hues of red, blue, silver, gold and pink. And to compliment her style she sported the signature long, puffy and wavy hairdo and her permanent and beautiful smile as she glides across the stage.

We were definitely looking forward to fully enjoying the concert as a few years back while vacationing in Jamaica we accidentally ran into Ms. Ross and her daughter at the Half Moon Hotel in Montego Bay prior to her performance at the Jamaica Jazz and Blues Festival. Unfortunately, that was an abbreviated performance; Ms. Ross only performed two songs then left the stage. We are still not clear about the circumstances that warranted such disappointment.

That experience has not discouraged me as a fan of the diva. Undoubtedly she is one of the most respected in the industry. It is very rare to have the longevity and stamina she has–and that is something to be admired.

One of my favorite moments of the concert was when Ms. Ross appeared on stage like Belle of the ball wearing a vintage pink off the shoulder gown radiant and beautiful as ever.

Gary and I certainly enjoyed listening and singing along with hits from her collection–favorites from The Supremes to her solo work like You Can’t Hurry Love, Stop! In the Name Of Love, My World Is Empty Without You. She had the crowd going during the 80’s mix and disco series singing, I’m Coming Out, Upside Down, I Will Survive, Ain’t No Mountain High Enough and others.

She rarely addressed the audience and when she did, it was brief.

We were a bit disappointed because it seemed as though she was racing through some of the songs. At times she seemed a bit out of breath. Whenever this happens she would continue with ohhhhhhhh, and the audience would participate in the sing-along long enough for her to regain her strength.

Then again, it’s Diana Ross so she gets a pass on this one. If I never hear her sing, just being in the same room with her–her presence was satisfying and priceless.

I will survive a remake to 70’s disco diva Gloria Gaynor’s classic hit is a testament to Ms. Ross’s longevity in the music industry–her endurance and commitment to her fans to continue to entertain them. A career that has lasted over 50 years which earned her; no Grammys but global respect, honors, awards and recognition.

During her performance of Reach Out And Touch Somebody, she told the audience to reach out and touch each other, spreading love and cheers in the crowd. Even though Ms. Ross did not physically touch anyone that night, she has done so through her music. So in ending, she can gracefully say, Thank you, and I love you (the fans) more today than yesterday for supporting her work and following her career over the years.