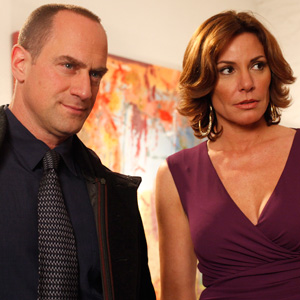 From her humble beginnings in Connecticut, Countess LuAnn de Lesseps is the break-out star of Bravo’s hit series “Real Housewives of New York City” and author of , Class with the Countess: How to Live with Elegance and Flair.

The former model and TV star will make a guest appearance on Law and Order SVU: Special Unit as an art lover who discovered a gruesome work of art in her apartment. As an art collector, she felt comfortable doing the role, which also required her to pose semi-nude.

“I was nervous,” LuAnn told me in our interview. Although the Countess spent years before the camera, it was still a challenging experience for her to face SVU’s main lady Mariska Hargitay.

When an art patron, Cindi (guest star Countess LuAnn de Lesseps), discovers a gruesome work of art, it leads gallery visitors to find a woman dead in her apartment above. Detectives Benson (Hargitay) and Stabler (Meloni) look into the victim’s personal contacts in search of suspects, including the victim’s close friend Annette Cole (guest star Kate Burton). The detectives soon discover a work environment that leads them to question if bullying does go beyond the playground.

LuAnn appears in the episode Bully which airs next Wednesday, February 23, at 10:00 Eastern on NBC. 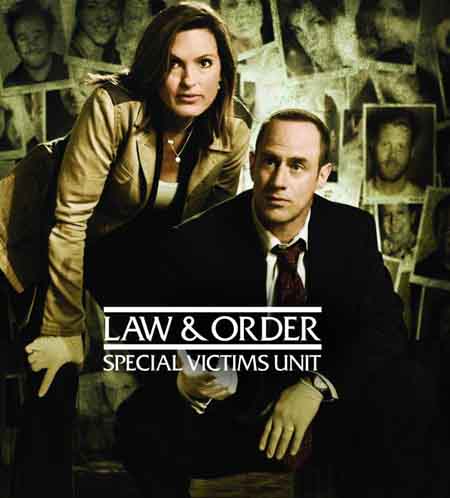 Bullying has become a very hot topic lately and will be highlighted on the show. Have you ever experienced that in some form in your own life?

LuAnn de Lesseps: I must say I did get picked on at school and have been bullied which I think a lot of kids have in the past. And I think it’s a difficult time period in teenage years and it’s bad any which way you look at it.  I have children and so I would hope they would come to me which I know I would because I’m very close with my children if they were bullied. But I think it’s important to have an open relationship with your kids and understand if that’s going on in their life. But I have been bullied in the past myself as a teenager.

How were you able to deal with this? How did you confront it?

LuAnn de Lesseps: Well I had a large family so luckily I had support from my family and it was a phase in my life. And I think these phases pass and you get through it and hopefully you have the support of people in your life besides children that could be bullying.

LuAnn, can you tell us a little bit about your new love on the Housewives and will you be doing more acting?

LuAnn de Lesseps: I would love to do more acting and move into other roles on other shows and hopefully back on Law & Order. I’ve already been called to do another appearance on another pilot on I think USA Network. I would love to go on 30 Rock for example. So you can put the word out there, okay? I’m saying it. Tina Fey, call me.  When I started the Real Housewives which was supposed to be called Manhattan Moms, it wasn’t even the Real Housewives. Little did I know that the show would become such a huge success. And never did I think I would write a book about my life and manners and etiquette. My book is really autobiographical about my journey and that’s what I share with people is my experience and what I learned along the way. Being able to sing and record and sing Money Can’t Buy You Class, I always thought it and said it in my book but to actually sing a song about it was really, really fun for me. And then to think I would be on Law & Order, I would have said no way. I just feel like it’s my time. And yes you will see more of my romance bloom on this coming season of the Housewives of New York. And I feel so fortunate that I got a second chance because it doesn’t happen to everybody and I really feel blessed that I found such an amazing person to share my life with. So you’re going to see some of that coming this season. I’ve been very lucky I’ve found somebody who adores me in my life again and I just have a second chance and SVU is a part of that second chance and it’s very exciting. My boyfriend helped me prepare for the role. He read lines with me and that was it basically. The director, and the writer Dan were the ones who said,  we think the Countess is perfect for this role and I think that they really wanted me in that role, embodying that role. And it happened very fast so I basically got my lines two days before I shot. So it was challenging but it was really great. 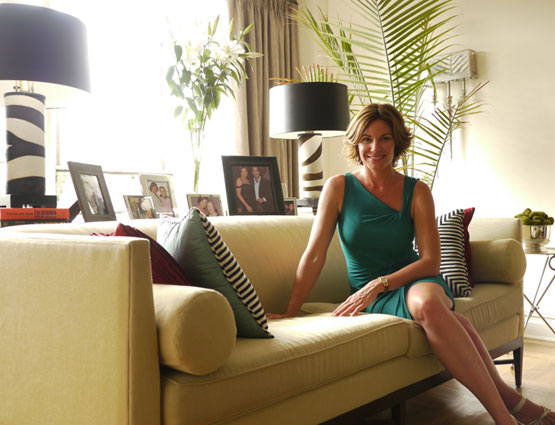 You will be semi-nude in the episode, so did you have any qualms about doing that and what does your boyfriend think of that?

LuAnn de Lesseps: It’s semi-nude and so I felt comfortable because I was covered and it was tasteful. So I didn’t have a problem with that. The problem is saying the lines and keeping yourself covered and being in the right place at the right time. Anyway, it was a fun, challenging experience for me.

What was it like for you working with the cast of SVU?

LuAnn de Lesseps: They were great. They were a great group of people and very supportive of me being there. You’ve got lines, I was posing for an artist and, you know, to, you know, all of those things mixed together is a totally different, you know, feeling than working on our reality show. So definitely doing a scripted show was more challenging but really fun. It made me – they made me all feel really comfortable. I was a bit nervous. I mean, these actors are such pros and they’ve been at it for a long time. And they were very helpful and very supportive of me and that made me feel really good and it created a very positive place for me to, you know, try my hand at acting. And I must say I got into it, I got into it. But, you know, it’s kind of scary standing in front of Mariska Hargitay, you know, having these lines and, you know, she’s a pretty amazing, powerful lady. And so, you know, it was a challenge but it was an interesting challenge and fun for me and I’d like to do more of it.

What’s the most important piece of advice that people should take away from your book, Class with the Countess?

LuAnn de Lesseps: Beauty, class, and elegance lie within the soul. It’s about confidence, it’s about respect. I talk about how it’s not, I sing Money Can’t Buy You Class, my message is it’s all about how comfortable you are with who you are and I think that really translates to people and people feel immediately that you’re someone of – you have class, charisma, all of those things are so important and I think they’re forgotten about today. The simple compliment that you give to people and how much that builds people’s confidence. So really it’s about being confident. And how elegance can be learned and that I learned along the way and that’s what I share with everyone in my book is the lessons I’ve learned when I came from a large family and I learned from very early on how to work with people and how to get along with people and the simple gestures. The please’s and the thank you’s get you a long, long way. I came from a background, I’m a nurse which a lot of people don’t know about me and so I think that giving is the true heart of elegance.