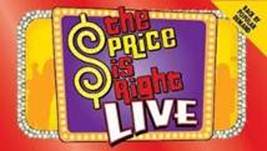 Contestants of “The Price Is Right Live” show at Seminole Casino Coconut Creek will not only get a chance to win those fabulous showcases starting April 18. They’ll also get to meet “America’s Dad,” actor Alan Thicke, who will host the game show for the remainder of its eight-week run through Sunday, April 29.

The multi-talented actor became a household name as Jason Seaver, a work-at-home psychiatrist with three children on the popular sitcom, “Growing Pains,” from 1985 to 1992.

The Price is Right Live matinees are on Saturdays and Sundays at 2 p.m. with shows on Wednesdays, Thursdays and Fridays at 7 p.m. There’s no age requirement for ticketholders, though contestants must be 21 or older. For a chance to “come on down” and be a contestant, register in the casino next to the valet entrance from 5-7 p.m.  General admission tickets can be purchased starting at $25 at www.ticketmaster.com.

Thicke’s background in game shows is extensive. He produced “Celebrity Sweepstakes” and “Wizard of Odds,” launching the career of his friend, Alex Trebek. “Wheel of Fortune and “The Jokers Wild” are among more than 45 TV theme songs he has composed, including those of “Facts of Life” and “Diff’rent Strokes.”

Some of his other television show credits include starring as the dim-witted Dennis Dupree on the NBC series “Hope & Gloria” and as a guest star on countless TV episodes including “Just Shoot Me,”  “Arliss,” “Son of the Beach,” “Married with Children,” “Seventh Heaven,” and “Outer Limits.”

TV movies and feature films he’s appeared in include Disneys’ “Not Quite Human” trilogy, “Any Place But Home,” “Obsessed,” “Betrayal of the Dove,” and others. In theater, he played opposite Jason Alexander in the Neil Simon/Burt Bacharach musical “Promises, Promises,” and his Broadway debut was as Billy Flynn in “Chicago – The Musical.”

He’s also an in-demand motivational speaker and the author of two humor books: “How Men Have Babies: The Pregnant Father’s Survival Guide,” and “How to Raise Kids Who Won’t Hate You.”  Both are perennial favorites, especially since his middle son, Robin Thicke, is a global rock star. He also recently signed a publishing deal for his first novel – “Lovely Parting Gifts.”

The Price Is Right Live™ debuted its eight-week run in The Pavilion at Seminole Casino Coconut Creek on Thurs., Mar. 1 with host Todd Newton, formerly of E! Entertainment Television. The Price is Right Live announcer, David Ruprecht, is a familiar face to all who is instantly recognized and warmly received wherever he goes. He’s been seen in the more than 50 sitcoms and dramas in which he has guest starred, including “Cold Case,” “Joan of Arcadia,” “Days of Our Lives” and “Three’s Company.”

The traveling show by FremantleMedia, which also produces “The Price Is Right,” “The X Factor” and other TV shows, features classic fan-favorite games including Plinko, Cliff   Hangers, The Big Wheel, and Showcase Showdown. Since 2004, one million fans have seen The Price Is Right Live, during which time more than $10 million in cash and prizes have been given away. The show recently completed two successful runs at The Palace Theater at Bally’s Atlantic City.

The Pavilion is a 1,200-seat entertainment venue that opened on Feb. 2 as part of the casino’s $150 million expansion. Numerous concerts have already been held in it, including Foreigner, Blue Oyster Cult and The Orchestra.

5,700 square feet of retail shops are located on the first floor courtyard of the new 2,400-space LEED Silver Certification-registered parking garage. On the south side of the state-of-the-art green garage there is a convenient transportation hub consisting of a large charter bus service lounge for the comfort of guests, a valet station, and a guest vestibule. Other amenities in the expanded casino include a new Player’s Club and a High-Limit gaming area. The new Player’s Club features revolutionary electronic guest interaction technology that eliminates guest waiting lines and immediately immerses players in the casino’s action. Conveniently located just inside the new northwest area of the casino, Seminole Casino Coconut Creek Player’s Club is the very first of its kind in the United States and is expected to completely change the guest service experience as the casino industry knows it today. The upscale High-Limit action area with its own bar/lounge is located in the center of the greatly-enlarged casino, containing 12 high-limit table games and more than 60 high-limit slot machines. Adjacent to the High-Limit, there is an attractive new casino promotions staging area. As part of the expansion project, The Site casino sprung structure building was converted into an intimate, new 1,200-seat show venue. Casino Coconut Creek development plans are being coordinated with, and incorporated in, the city of Coconut Creek’s MainStreet development.

Named the “Best Place to Gamble” by Broward-Palm Beach New Times, Seminole Casino Coconut Creek currently offers more than 2,300 of the latest and greatest slot machines including Las Vegas-style slots. The casino now has a non-smoking area as a result of its recent floor expansion. Two of the most popular games are The Hangover and Leprechaun Gold. Some of the most popular progressive slot machine titles are Ghost Busters, Diamond Jackpots, Vegas Paradise, Monopoly Big Event, Wizard of Oz and Slingo Bonus. Denominations range from one cent to $100. The casino now offers 65 table games including live blackjack, baccarat, and popular novelty games such as pai gow poker. It features 24/7 high stakes no-limit action in its Stax Poker Lounge, with a wide array of tournaments for all types of players. Live poker games include Texas Hold ’em, 7-Card Stud, and Omaha tournaments with buy-ins from $85 to more than $1,000.