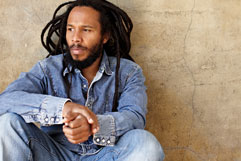 Ziggy Marley brings his rich reggae hgeritage to the intimate Fillmore Miami Beach at the Jackie Gleason Theatre on Wednesday, May 9th, 2012 at 8:30PM.  Tickets are on sale Friday, February 17th / 10AM.  This is part of the Cruzan Concert Series.

A five-time Grammy-winning musician, actor, artist, activist and humanitarian, Ziggy Marley has established his presence on the public stage for over a quarter-century. A native of Kingston, Jamaica, Ziggy Marley and his siblings first sat in on recording sessions with his father’s band, the legendary Bob Marley and the Wailers, when he was ten years old. Later, Ziggy joined with his sisters Sharon and Cedella and brother Stephen to become Ziggy Marley & The Melody Makers, allowing him to craft his own soulful sound which blends blues, R&B, hip-hop and roots reggae. His debut solo album, Dragonfly was followed by Love Is My Religion, a Grammy winner that further explored personal, social and political themes amid a fragrant mix of roots reggae, traditional rock ‘n roll, African percussion and other varied musical elements. Recently, Ziggy won his fifth Grammy Award, in the category “Best Musical Album for Children,” for Family Time, a collection of reggae-inflected, family-oriented songs. His most recent album, Wild and Free, is a powerful one, as it propels him to challenge social injustice along with the political weapons of ignorance and fear.  It may be Ziggy’s most political and personal to date.