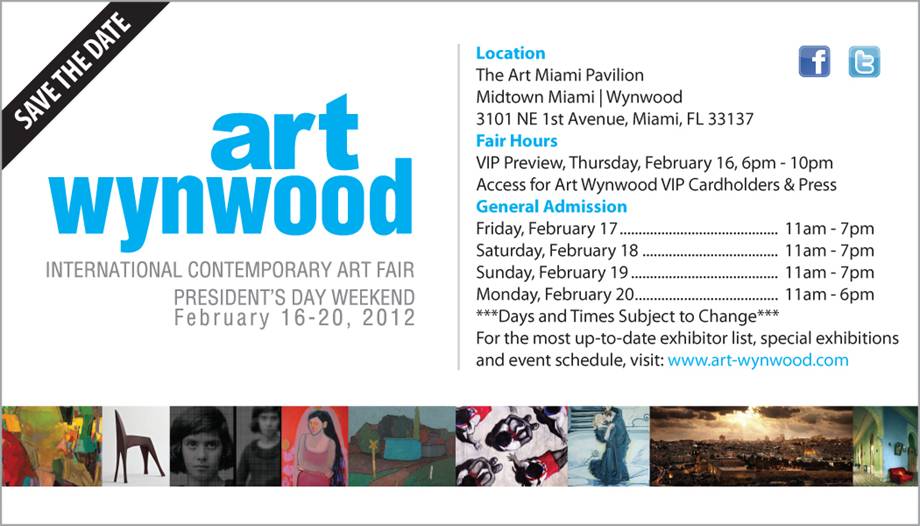 In celebration of Art Wynwood’s debut, guests at the VIP Preview on Thursday, Feb. 16, will have front-row seats to a special live performance and exhibit by Indian visual artist Amrita Sen. Commonly known as Bollydoll, Sen is not only recognized as the talent who sang “Jai-Ho,” the theme song from Slumdog Millionaire with A.R. Rahman, but has also performed at The Oscars and is a sought-after songwriter produced by Timbaland. With the support of South Florida’s Harvard Club and its 5,000 members, Bollydoll will transform the Art Miami Pavilion’s café into Bollywood, spotlighting the contemporary art fair’s international flair.

Celebrated ethical fashion designer and visual artist Luis Valenzuela will also be onsite opening night showing a selection of one-of-a-kind pieces created for his EcoArtFashion© collection. A pioneer in green art and eco-friendly fashion design, Valenzuela’s collection features fantastical gowns based on the art of the greats such as Dali and Picasso, addressing the ideas of progress sustainability, appropriation, debt and responsibility.

Capturing the essence of what the Wynwood Arts District and the Miami art scene have to offer, Wynwood pioneer Tony Goldman will exhibit what he describes as “the flying murals of Wynwood” in the fair’s VIP Lounge.  Under his guidance, six 8’ x 24’ murals by international artists, including a Retna work from the Janet and Tony Goldman Collection, an existing piece from How & Nosm, as well as new murals from DAZE, Aiko and Futura, will be installed.

Goldman has also commissioned a special exhibit by Ron English, who is one of the most prolific and recognizable artists of the day.  English’s Camo Deer series of four seasons-inspired murals and sculptures will be installed in six separate vignettes throughout the fair, adding his signature style to Art Wynwood’s landscape.

A “must see,” internationally acclaimed filmmaker and artist Peter Sarkisian has created a hyper-technical body of work including Mind Under Matter/Matter Over Mind, Ink Blot and Book 1, which, together, suggest a loss of communication. Through video and tiny projectors with sound, Sarkisian deals with illusion and perception. Viewers will be stimulated by the slightly humorous table-top sized works which portray the manipulation of floating pencils, journeys of small ink-covered figures struggling to reach a note pad, and the revision, editing and rewriting of a dictionary.

Last but certainly not least, the Fair will showcase a special exhibit by Chicano artist Luis Jiménez, who was known for his large polychromed fiberglass sculptures usually of Southwestern and Hispanic themes. As exhibited by ACA Galleries, Jimenez’s works are often considered controversial as well as eminently recognizable because of their themes and bright, colorful undulating surfaces, was sadly killed in his studio in 2006 when a large section of Blue Mustang, intended for Denver International Airport, fell on him and severed an artery in his leg.