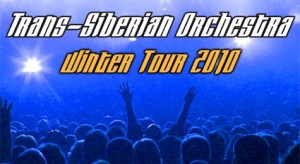 “Take the arena-filling production spectacle of Kiss, the light show of Pink Floyd,

the theatrical rock of Queen–then add a Christmas theme.

The result is Trans-Siberian Orchestra.”

Begin with the theatrical appeal of the Phantom of the Opera and the rock opera storytelling of The Who’s Tommy. Then add Romantic Era classical melodies a la Mozart and Strauss, the progressive classical/rock fusion of bands like Queen and Yes, the metal edge of Black Sabbath and Led Zeppelin and dustings of musical spices that range from Gospel to Celtic to Motown to Jazz.  Have these varied musical ingredients brought to life in the most powerful way possible – by a 60-piece ensemble that marries a full orchestra, a full rock band with a dozen lead singers.  Complement this massive sonic recipe with staging that is always one step beyond state-of-the-art, a sensory onslaught of lighting and pyrotechnics.

It’s been 14 years since Trans-Siberian Orchestra debuted with the single “Christmas Eve (Sarajevo/12/24),” inspiring generations of fans to rediscover the multi-dimensional art form of the rock opera.  TSO has sold more than seven million copies of its first four rock operas — 1996’s CHRISTMAS EVE & OTHER STORIES, 1998’s THE CHRISTMAS ATTIC, BEETHOVEN’S LAST NIGHT in 2000 and 2004’s THE LOST CHRISTMAS EVE.

On the road, meanwhile, they have become one of the world’s top touring acts. TSO’s 2009 Winter Tour played to over 1.2 million fans in 80+ cities, and generating revenues of nearly $45 million, which according to Billboard magazine’s midyear touring chart, put them as the #2 most attended tour. Since its first Winter Tour in 1999, TSO has been one of the concert business’s most successful acts, consistently rating in the Top 10 for both gross revenues and audience attendance.  And, oh yeah, there was that crazy beer ad with the insanely decorated Christmas house whose lights were synced to TSO’s “Wizards in Winter.”

Now TSO is taking us to a bold and exciting new place — NIGHT CASTLE.  Recently released it is a sweeping two-disc set whose 26 songs embrace hard rock theatrics, classical majesty, operatic beauty and chorale richness.  NIGHT CASTLE is TSO’s ultimate creative statement, a transcendent and enveloping experience built upon a gripping story with a resonant and timely message.

“Every day, we’re working across the board to have the biggest emotional impact on our fans,” concludes TSO creator Paul O’Neill.  “We’re composing music that cuts even deeper, building the best possible ensemble, working to make our staging something that completely blows them away and if we are fortunate maybe even changes their lives in a little way for the better.”