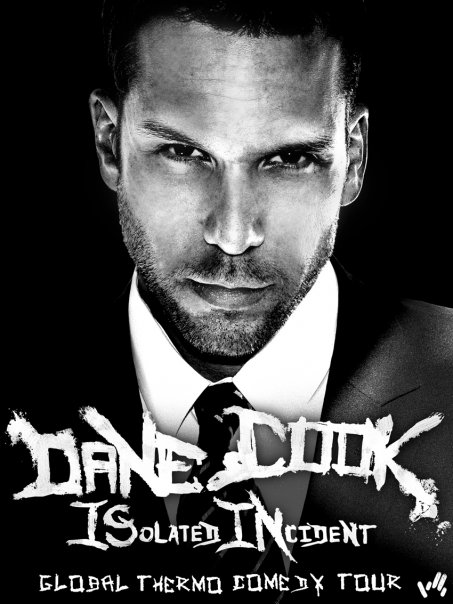 Dane Cook’s upcoming shows this week in Florida have been cancelled due to recent personal matters.  The dates that are affected are Tallahassee, FL on October 21 (Leon County Civic Center), Gainesville, FL on October 22 (Stephen O’Connell Center), West Palm Beach, FL on October 23 (Cruzan Amphitheatre), and Tampa, FL on October 24 (1-800-ASK-GARY Amphitheatre).   ”I appreciate all the support from my fans in Florida and I promise you all, that I will be back soon,” said Cook. Ticket holders will be offered the opportunity to be placed on a priority notification for premium seating for all of Dane’s rescheduled Florida dates in the future. Refunds are available at the point–of-purchase.

The tour will continue as planned through 30 cities in the United States and Canada starting back up in Syracuse, NY on Tuesday October 26th and concluding on Saturday December 4th.

The comedian’s 2010 tour had been scheduled to coincide with the release of a new greatest hits comedy album on Nov. 23.

Named a “comedian phenom and icon” by Entertainment Weekly, Dane Cook has maintained his reputation as one of today’s most prolific stand-up comedians while simultaneously distinguishing himself as a charismatic and versatile actor in a variety of film and television projects. Combining energetic physical comedy, clever wordplay and trenchant observations about human behavior, Cook’s unique brand of stand-up and accessible guy-next-door attitude have galvanized audiences of all ages.  He catapulted to media headlines when his sophomore comedy CDx2/DVD, Retaliation, bucked industry trends by debuting at #4 on the Billboard 200. The album, which has hit double platinum, marked him as the highest charting comedian in 27 years, earning him a place alongside best-selling comedy vets Bill Cosby, George Carlin and Steve Martin. A firm believer in connecting personally with his fans, Cook became one of the first comics to develop and maintain his own website to reach out to audiences. He still routinely spends hours every day personally answering fans’ emails and works tirelessly to remain accessible through blogs, podcasts, and free downloads of his routines. As a result of his efforts, his website, danecook.com, now receives over 500,000 hits per month and his MySpace following has grown to an unprecedented community of 2,300,000 friends.

For more information go to: www.livenation.com.