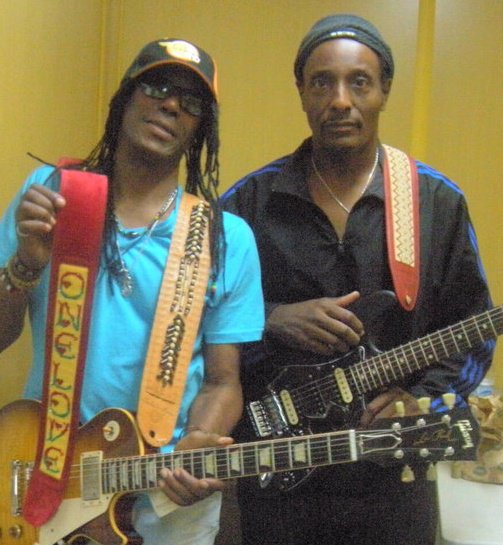 Together with Bob Marley, the Wailers have sold in excess of 250 million albums worldwide. In England alone, they’ve notched up over twenty chart hits, including seven Top 10 entries. Outside of their groundbreaking work with Marley, the Wailers have also played or performed with international acts like Sting, the Fugees, Stevie Wonder, Carlos Santana, and Alpha Blondy, as well as reggae legends such as Peter Tosh, Bunny Wailer, and Burning Spear. As the greatest living exponents of Jamaica’s reggae tradition, the Wailers have completed innumerable other tours, playing to an estimated 24 million people across the globe. They have also been the first reggae band to tour new territories on many occasions, including Africa and the Far East. The anchor of the band is Aston “Family Man” Barrett, who in addition to being Marley’s most trusted lieutenant, played on countless other classic reggae hits throughout the seventies. The authenticity he brings to the Wailers’ sound is indisputable and yet today’s line-up combines old school know-how with lead vocals from one of Jamaica’s most exciting new singers. Koolant joined the Wailers soon after his cameo appearance in the film Made In Jamaica. As enthusiastic audiences have already discovered, Koolant brings his own personal expression to Marley’s songs, revitalizing them for young and old alike.

ON SALE:        NOW AT THE REVOLUTION LIVE BOX OFFICE, www.livenation.com

AND ALL TICKETMASTER OUTLETS

ALL TICKETS GENERAL ADMISSION – ALL AGES