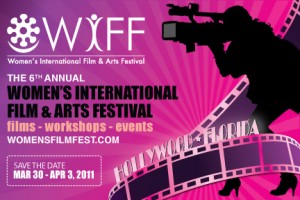 The Women’s International Film & Arts Festival, (WIFF) will now be held in Broward County from Wednesday, March 30 and run through Sunday, April 3, 2011. The festival opens with a star-studded red carpet event at the Broward Center for the Performing Arts in the historic Amaturo Theater. The festival will run for five days from March 30-April 3, 2011, in various theaters throughout Broward & Miami-Dade County. A diverse selection of over 50 films will be screened from over 25 countries including: Austria, Argentina, India, Brazil, France, Haiti, Italy, Israel, Iran, Japan, Netherlands, Spain, Palestine and many more.

The star-studded opening night red carpet event will feature “Latin Music USA:  Divas and Superstars”, a film directed by the acclaimed, local, Emmy Award winning filmmaker, Adriana Bosche.  This film focuses on the recent Latin Pop explosion and its influence across the music industry and popular culture.  The film highlights the success of artists such as Ricky Martin, Marc Anthony, Jennifer Lopez, Shakira and Emilio and Gloria Estefan and their explosion, not only into the English-Language pop music market, but how the Latin wave has influenced style, youth and urban fusions to create Spanish Rap, Raggaeton, as well as Rock en Espanol.

Attendees for this year’s festival include Gregory Allen Howard: writer of “Remember the Titans” starring Denzel Washington, Jo Marie Payton from the 1990’s sitcom “Family Matters” and many more.

The 6th anniversary festival offers film enthusiasts an exciting 5 days full of events in a city ready to welcome its guests, Hollywood, Florida. The events include screenings of feature films, narrative shorts, student film musicals, international documentaries, and short films celebrating the lives of women around the world. In addition, the festival will offer workshops with Gregory Allen Howard:  writer of “Remember the Titans” starring Denzel Washington and “Ali” starring Will Smith and Jada Pinkett Smith.  Panel discussions, a pool party/fashion show and luncheons will also be held throughout the festival.

“Our sixth year anniversary is especially exciting because we have the support of the city of Hollywood. Film lovers will get to experience the city in a very refreshing way that supports our cause and the city and all its beauty.” said Yvonne McCormack-Lyons, President and Executive Director of WIFF.