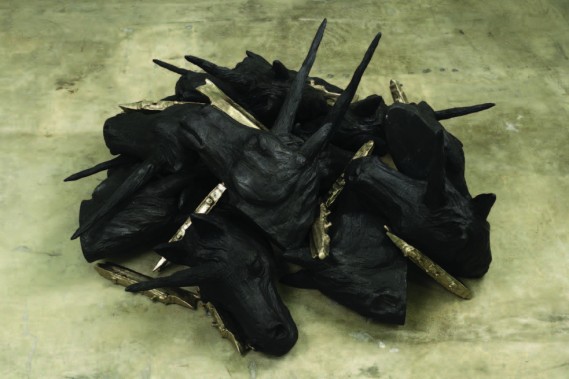 The studio of Enrique Martínez Celaya will be open for an informal brunch on Thursday, December 6, 2012 to unveil several monumental works he has created for his upcoming solo show at SITE Santa Fe.

Hours Open to the Public during Art Basel:
Thursday, Dec 6th, 9am to 1pm

This is a rare opportunity to see for the first time several key elements of what will be an unprecedented museum-wide installation that Martínez Celaya is creating for SITE next summer. For these new works, which include two large-scale paintings, and two massive sculptures, the artist has relied on readings on the nature of memory and on his own biography to create a world that belongs to the imagination of children and which juxtaposes sadness and melancholia against fantasy.

This viewing is the last public event for the artist in a year that includes a historic exhibition at the State Hermitage Museum in Russia, acquisitions by the Moderna Museet and Konsthallen Strandverket på Marstrand, his selection a Montgomery Fellow at Dartmouth College, a new bilingual monograph published by Ediciones Poligrafa, and critically acclaimed solo exhibitions at LA Louver in Los Angeles, Galeria Joan Prats in Barcelona, and Galleri Andersson/Sandström in Stockholm.

The studio, which Martínez Celaya designed and built in 2009 is a laboratory for the artist whose influences are as varied as Robert Frost, Hermann Ebbinghaus, and the design of Chinese night lights. In addition to the works for SITE, visitors to the studio will be able to see paintings, sculptures, photographs, and works on paper by the artist from the last 10 years installed in several large rooms, a series of large charcoal portraits, and the studies for the park and sculpture he unveiled in Miami in October.

Enrique Martínez Celaya was trained as artist and physicist and works in painting, sculpture, photography, and writing. His work, which frequently takes the form of multi-disciplinary environments, has been widely exhibited internationally and is included in the permanent collections of the Metropolitan Museum of Art, The State Hermitage Museum, the Whitney Museum of American Art, the Museum of Contemporary Art in Los Angeles, and the Museum der bildenden Künste in Leipzig, among others.

Martínez Celaya initiated his formal training as an apprentice to a painter at the age of 12. He studied Applied & Engineering Physics at Cornell University, worked at Brookhaven National Laboratory, and pursued a Ph.D. in Quantum Electronics at the University of California, Berkeley. As a physicist, he published scientific papers on superconductivity and lasers, and is the inventor of several laser devices and of an often-cited patent. He attended the Skowhegan School of Painting & Sculpture in Maine and earned a Master of Fine Arts with the department’s highest distinction from the University of California, Santa Barbara, where he was supported by a Regents Fellowship. In addition to his pursuits in the visual arts, Martínez Celaya is the author of Collected Writings and Interviews 1990-2010 and The Nebraska Lectures, both published by the University of Nebraska Press (Lincoln), The Blog: Bad Time for Poetry, published by Whale & Star Press (Miami), October, published by Cinubia (Amsterdam), and the artist book Guide, which was later serialized by the magazine Works & Conversations (Berkeley). He has also written essays on art, poetry and aesthetics and has lectured at international venues including the American Academy in Berlin, the Aspen Institute and the Art Institute of Chicago.