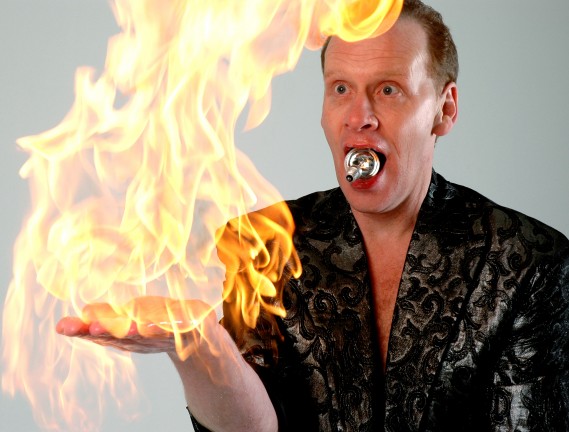 Stevie Starr, who has amazed the world with his astounding ability to swallow objects, even live fish, and safely regurgitate them, will perform a free show at Seminole Casino Hollywood, located at the corner of Stirling Road and State Road 7, on Wed., Nov. 2 at 8 p.m. Free tickets are available on a first-come first-serve basis, at the Seminole Casino Hollywood Player’s Club.

The performance artist from Glasgow, Scotland, who refers to himself as a “professional regurgitator,” has appeared on many television shows, including the “Tonight Show with Jay Leno,” the “Late Show with David Letterman,” and “Late Night with Jimmy Fallon.” He has a busy international touring schedule for his longer solo act that delights audiences with bizarre feats of gastroesophageal acrobatics. Starr can even swallow numbered coins and return whichever number the audience requests: From one to 10, he produces the correct coin every time! To get an idea of what he can do, view his 2010 audition from “Britain’s Got Talent” here: www.youtube.com/watch?v=ethCJ4bfJkg

Lest anyone think Starr is an illusionist, during an appearance on Howard Stern’s TV show in the 1990s, Starr was shown swallowing broken glass and other dangerous objects and carefully regurgitating most of them, as usual in his act. But then the camera followed him into a restroom where he stuck his finger down his throat and vomited up the remaining objects.

This free show in the casino’s entertainment pavilion is for guests 21 years of age or older.