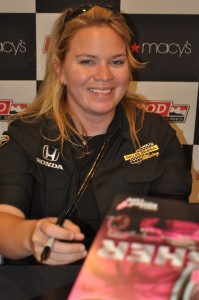 Female drivers are a rarity in car racing and when they do compete they make a statement to the racecar world. Often times they are underrated and underestimated by their male counterparts. However, this resentment and attitude towards them only push them more to compete for titles all over the world.

Sarah Fisher has carved a space in the history of car racing for herself among Janet Guthrie and Lyn St. James. Sarah has had many first in various car racing competitions, and is continuing to standout in her career.

Fisher made history by becoming the first female driver in the 21st century to drive a Formula One car when testing in 2002 at the Indianapolis Motor Speedway; a test arranged by her personal sponsor, TAG Heuer. In 2003, she set the record as the fastest woman to qualify for the Indianapolis 500 with a four-lap average of 229.439 mph (369.246 km/h).

While Sarah was in Miami for the IndyCar Series Championship finale in Homestead-Miami, I caught up with her to discuss her involvement with breast cancer, owning her own car (The Pink Car) and some challenges of being a driver.