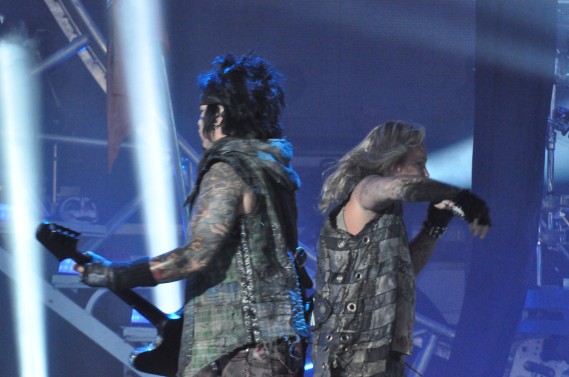 In 2004 Motley Crue announced a reunion of one of the most dysfunctional heavy metal rock band in history.

Nikki Sixx, Vince Neil, Tommy Lee, and Mick Mars are current members of Motley Crue. A rock band that has been plagued with separation, lawlessness, drug abuse, explosive sex escapades, alcohol abuse, and endless in house lawsuits. All the aforementioned were non-existent on stage at the Cruzan Amphitheatre in West Palm Beach during their performance.

Motley Crue is on their fourth co-headlining tour since 2006 which began with a successful tour with Aerosmith, followed by the Motley Crue 30th anniversary and Poison’s 25th anniversary, then Def Leppard and special guest Steel Panther 2011 UK Tour. Now Motley Crue/Kiss 2012 tour. And they kicked ass.

UK rock band, Treatment set the stage for the concert by opening for Crue and Kiss. They blended perfectly and served their gods well with a healthy dose of punk rock. Band mates Ben, Matt, Tag and Dhani whose influences included Sex Pistols and Aerosmith were more like sinners who needed no forgiveness from the Gods of Rock for setting the wild and outrageous atmosphere.

From there on it was loud, hard rock with both Crue and Kiss delivering an explosive performance with platform boots, pyrotechnics, heavy make up, fire shooting guitars, Spiderman episodes, rockets, spandex, spiked cape, blood and tongue.

Theatrics was the theme of the night with Crue’s grand march through the crowd with his clan following while Kiss entered on flaming rockets.

These guys now fall in the senior citizens age group; they were rocking on all cylinders and kept the crowd pumping the entire night, proving that age is nothing but a number.

Crue acted as the teaser and kiss the closer with both drama and theatrics. The concert was nothing like we expected which blew our minds.

Gene Simmons, the family man from “Gene Simmons Family Jewels” often steps outside the home of his reality series to play rock god. Here he referenced himself to being the Greek god, Zeus, and in typical Simmons fashion, the tongue rules. At intervals he blew fire, spewed blood and lengthened the tongue.

The video and background effects of the Kiss band were amazing and generously done. However, the most eye-popping episode came when Paul Stanley, guitarist took flight like Spiderman on a high wire to a raised platform in the middle of the audience; sending off a loud burst of excitement from the crowd.

This double billed concert was one of the best rock combinations, which seems to be a very successful strategy for the Crue team. And a 2 for 1 deal to see rock’s greats.

Adrenaline was high amongst the Motley Crue band. Nikki Sixx flame spewing bass guitar during “Kickstart My Heart,” a song that was inspired after being revived by EMT from a heroine overdose, was mind blowing.

Mick Mars solo was mesmerizing, as well. However, the highlight of the show came when Tommy Lee gave a fan the rock star treatment, an invitation to ride on his roller coaster/360 drum kit. This was a true rock star moment to watch lee perform with such energy and enthusiasm.

Both bands launched an assault of loud screaming music on the ears. Kiss sprinkled a few new songs promoting their new album, Monster. While Crue gave a list of classics that gained them global recognition such as “Home Sweet Home,” “Live Wire,” “Shout at the Devil,” and “Girls, Girls, Girls.”

In the end, the audience walked away fully satisfied when Kiss disappeared behind smokes after singing their biggest hit, “I Wanna Rock n’ Roll All Night.” it was a great night for Rock n’ Roll.