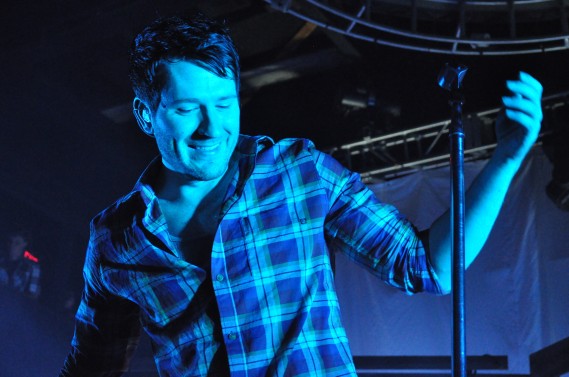 For a young guy who is used to playing and experimenting with music in the solitude of his mom’s basement in Minnesota, Adam Young who goes by the name of owl city has made leaps to a successful music career.

Now the singer performs at small venues around the Nation with long lines around the block of fans as young as 10 years old to hear him sing “1,000 hugs from 10,000 lighting bugs” among other anthemic songs. And this was no different when he played at the Revolution Live, Florida.

During his MidSummer Station tour, his stop at the Revolution Live was rated as unforgettable by most concert goers, and screaming teenagers.

Using social network sites like Myspace and Itunes as a launch pad, Adam’s grassroot movement garnered a strong following resulting in over 1.4 million downloads of his most popular track to date, fireflies. A favorite among concert goers.

The atmosphere was family friendly and complemented the output from Adam as PG-13. No profanity.

After the success of fireflies in 2009, Adam took a break explaining that his life went from 0 to 60 in one second, and that his career took off like a whirlwind. The record sold over 5 million copies.

Now he has returned with his electronic pop music. He is back on the rollercoaster with a new album, MidSummer Station; a title he claimed is a result of his insomnia and was purely imagery.

The vibe of this new album is different from previous albums and is more fun, poppy and dancey. One of the most popular hit, Good Time, a slow jam and collaboration with Carly Rae Jepsen singer of Call Me Baby. So far this record sold over 1 million copies.

This summer was devoted to promoting the new album. And Adam hopes to repeat the same success as he did in 2009. Whether this album is successful or not, his performance was a hit among the crowd.

When: December 1&2, 1:00pm to 7:00pm If you’re on the hunt for a midday dance break or feeling claustrophobic in the Miami Beach Convention Center, look no further—on Thursday and…