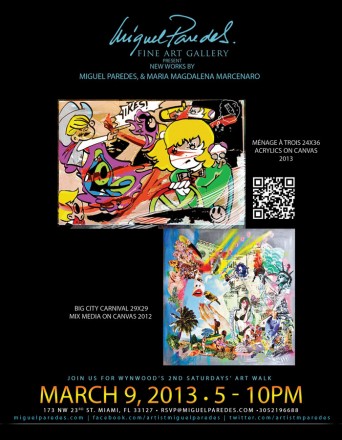 Miguel Paredes, Miami based artist, New York native, and newly Los Angeles entrenched and inspired, recently announced yet another series of original works inspired by his recent adventures throughout California. Having grown up in the New York City graffiti and art scene, it was only until this past year that Paredes fully embraced the West Coast lifestyle.

Traveling through California and staying at different hotels from Laguna Beach, Santa Monica, Los Angeles and Palm Springs, Paredes drew influences from the culture, nightlife and his many friends who introduced him to everything that makes the opposite coast the dynamic, energized melting pot that it is.

His latest series, “LA Stories…. Molly is not a Hipster,” is a combination of interpretations of 1970’s animated characters like Rocky & Bullwinkle, Felix the Cat, Rawhide Kid, Denis the Menace, Superman and more.

The collection, which includes sketches, oil on canvas and mixed media, shows the influence drugs, nightlife, celebrity and under culture has on those living the LA lifestyle.

Further embracing his time and friends made in Los Angeles, Paredes teamed up with fellow artist Magdalena Marcenaro to exhibit together in upcoming shows, along with Paredes’ mentor, Ronnie Cutrone who worked alongside Andy Warhol at The Factory.

Marcenaro‘s work has been shown in Buenos Aires, New York City and Miami and galleries including The Scope Foundation, Gowanus Print Lab, Peanut Underground Gallery, Miguel Paredes Gallery and The Urban Folk Art Gallery.She has been featured worldwide in publications such as News 12, Season 3 of New York Ink, Juxtapoz Magazine, Brooklyn Bugle and Brooklyn Based Magazine.

The 6,000 square foot Paredes’ Fine Art Gallery in Miami’s Wynwood Arts district will be open for public viewings on the 2nd Saturday of each month, featuring Marcenaro on March 9th.