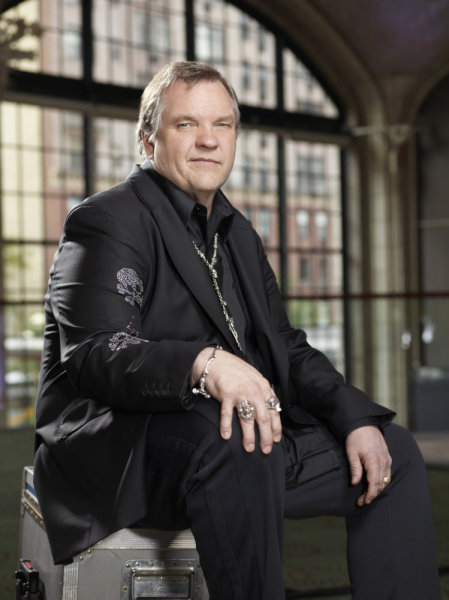 Grammy Award-winning rockstar, Meat Loaf will be a contestant on NBC’s Celebrity Apprentice, season 11. And in our interview, he shared his reason for signing on to this season’s show, his fight with Gary Busey, and that he is ready to get on Donald Trump’s campaign bus, should he decide to run for President of the United States.

“The Celebrity Apprentice,” premiering on Sunday, March 6th at 9pm EST/PST. And airs every Sunday.

Why did you sign on to do this season’s Celebrity Apprentice?

Meatloaf: The season with Sharon and them and it – I don’t know if that was an official invitation but it had been brought to my attention and we were really busy and I said no. And I have to admit that I have been asked to do probably every reality show in the world and I’ve said no over and over and over and over again. And this year early on, way early, I got a phone call and the show actually Bret had just won and the phone call came in. And I had been good friends with Sharon and Ozzy since the 70s and Cindy since the 80s. I’m not great friends with Bret but I know Bret and I thought last season’s show I really enjoyed it. So I – it was on-the-fly. And they said do you want to do it? And I went yes okay I’ll do it. And it was that quick. I didn’t talk to anybody. It was just like you want to do it? Okay sure tell them yes and I kept going. And then about five weeks before I went-did I say I was going to do Celebrity Apprentice? And they went yes. And I said oh okay when do we start? I know this is going to seem really silly on my part. But the one thing that I didn’t anticipate is that it was on TV and that people would – because I get recognized everywhere I go. And when have hit records you get recognized more and dah, dah. And so for the last I’ve cut my hair and I’m able to go to the grocery store and people come up and go hey aren’t you Meatloaf? I like your stuff great. Good, bye I want my soup. I want my soup. Well just from the trailers it started. I’ve in landing in airports and it’s gotten crazy. And I’m going you know what I forgot about this part of it. So that’s the only part. I’m happy I did the show. I’ve really learned a lot. I’m happy we did it for the charities. And the only part is that people attack you in airports.

Meat Loaf on Donald Trump running for President of the U.S.A.

Meatloaf: I am ready to get on the campaign bus.

Did you have any particular strategy going in?

Meat Loaf on lessons learned from Donald Trump and being on the show:

Meatloaf: The show turns out to be a self-examination really. I’ve been being my own boss forever. But it’s about the ability to be able to know that you can work with other people and hope, believe that they don’t think that you’re a complete control freak. And to find out a lot about yourself in those periods when it gets really tiring and really exhausting and who you are as an individual and how much strength that you have within yourself. And the other thing that I learned– I learned things about myself that I knew how to do that I didn’t know I knew how to do. And that amazed me more than anything. And within my friends and my family I talk about these things about what some of the things that I learned that I had no clue. And I really find it an extraordinary experience. I just hope people leave me alone in airports. I don’t know if he remembers but I met Mr. Trump down at Dan Marino’s golf tournament a couple of years. And people that are really intelligent and really, really smart I always want to get inside their head. I want to ask questions and I want to know what they know or as much as I can get out of them because that’s part of the learning experience. Mr. Trump is literally one of the smartest people I’ve ever met in my entire life. And I had respect for him but I have so much more now after doing the show than I did before. And I’m going back to you judge a person — and that you really do this — by their children. And his children are just unbelievable. But Mr. Trump’s really smart. And no matter what people think about his politics or the politics this — and I’m going back to CPAC because I really liked it — this CPAC thing was dead on. He’s he really is. He really is real. I understand the television time but he really is real.

Meat Loaf on his fight with Gary Busey and Star Jones:

Meatloaf: I saw Gary recently. So and I walked up to him, gave him a hug and said I’m putting you in the hospital in four minutes. And then his fiancée looked at me and said thank you for that line. I said you’re more than welcome. She goes that’s what I tell him every day. So I helped her out there. But Gary and I have known each other since the 70s when when he was doing Buddy Holly. So I’ve known Gary for a while. Gary can be a bit trying at times. I will admit we were tired when I lost it. And when I lose it I lose it, what can I tell you? I mean I really go off the deep end. But I don’t do it very often thank God. That’s like once every couple of years. So I’ll argue. I’m an arguer. I’ll debate to death but not turn to the blue meanie. And the thing is that that was the one moment of the show that I was really upset with myself about and really worried about it. And I said to somebody in the cast I said who was there? I said do you think they’ll edit that out or show it? And he goes what are you kidding? And lo and behold here it comes up on the trailers. And I’m going oh. Now then my wife and I we see the trailers and all we do is just sit there and laugh now. At first I was like going oh man no, and now I laugh. Then I saw Gary so I have no enemies from this show. Maybe people I might be an enemy of someone but I don’t have any. But I’ll tell you what though, as scary as I was NeNe scared me. I don’t know that Star will be every one of my great buddies either but it is a great season. I came out with friends and I don’t believe that I came out with enemies. And that’s just how I roll.