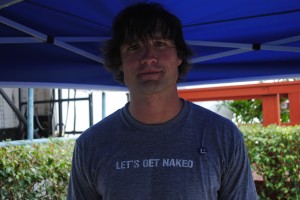 Walker Hayes, the new Elvis of country music. With good looks and great vocals, Walker has his fans, especially women wanting more whenever he performs. This southern charmer is serious about his work as an emerging singer/songwriter. At the end of the day, his main focus is to bring home the beacon for his family, a wife and 3 lovely children.

At the Country Throwdown in West Palm Beach, I had a good chat with Walker where he revealed his run-in with Keith Urban, and his obsession with facebook, “I am on facebook like a mad man.”

Check out “Let’s Get Naked,” his new release, and get a free ringtone by texting Walker Hayes to 63937.

PGM: Who is Walker Hayes?

Walker Hayes: I am from Mobile, Alabama…

Walker Hayes: Oh yes, southern for sure-without a doubt. I have been in Nashville for 6 years had a series of record deals on and off and now I finally have one I haven’t come off as yet. Got a record coming out-don’t know when its coming out-now my single is July 26th-don’t know what it’s called though-still trying to figure it out- I am on Capitol Records. I am a songwriter, that’s what I really do. The artist thing just kinda keeps falling in my lap. My favorite thing is to get up and write songs, but….

PGM: So who do you currently write for or who have you worked with?

Walker Hayes: I write for a small….you know what? When I moved to town, a guy named Buddy Killan hired me to his publishing company. He died unfortunately, like a year after he hired me and my manager Christy DiNapoli of  The Music Group International took over, and I started writing for them.

PGM: All the other artists/songwriters that I have interviewed earlier have had some sort of encounter with Keith Urban. Have you had the chance to work with him?

Walker Hayes: An encounter with Keith..I have a funny story about Keith. I had my first encounter with Keith at the BMI Awards-Keith doesn’t know who I am, and I am on his label; I think that he would know that I am on his label. Anyways, you know how it is… I was at the BMI Awards 2 years ago, and I followed Keith, kinda on accident into the men’s room. It was a big long line, and so I used the bathroom next to Keith’s, and that’s the really only encounter I’ve had with Keith. That’s it. Other than that, we see him at all the Capitol parties, and stuff like that. He’s not like, ‘What’s up, Walker.’

PGM: You have not done any work with him?

Walker Hayes: No, not yet.

Walker Hayes: Oh yes! Absolutely. He is a hero of mine-definitely one of my influences for sure, so yes. I like him and Nicole Kidman too-definitely,I am a fan.

PGM: Who are some of your major influences?

Walker Hayes: My influences are any artists who keeps you guessing. That is why I love Keith because one minute he is singing a love ballad, and kind of got you in a trance and the next minute he has you cracking up-beating on your dashboard while you are driving-you know. Brad Paisley is a big influence. I love the humor in his writing, keeps you guessing to do something serious, then makes you laugh. Garth Brooks, I mean, who did he not influence. Really all kind of music, but those are definitely country influences.

PGM: You have the women going crazy over you on and off stage…..

Walker Hayes: I don’t know about that…I don’t know…I thank my parents for combining to make me; that’s not really something you can choose-right? But it’s helping me I guess.

PGM: Knowing that your strongest supporters are women, do you use it to your advantage?

Walker Hayes: The common theme of my album is making love, it just is. That is where my brain goes and that’s what comes out when I write, so you know, the music caters to women for sure. I enjoy the strong response from them.

PGM: Are you having fun on the tour?

Walker Hayes: This is incredible. Normally, I am an opening act-that’s all I do. For me to come for 6 weeks and rock with the guys, get all this exposure, kind of share their fans-unbelievable.

PGM: You have a unique style that Marshall Altman was drawn to. What was it that really captured his attention and interest in you?

Walker Hayes: I think he appreciated the love theme, and he was always saying he likes the authenticity of my writing-just unfiltered. It’s kinda hard to choose songs, because you want songs that you can give to the public-cause you know-somewhere you gotta stop because you cannot be on the radio, and be dirty. He saw a pop side of me, pop/rock in there, and that’s what he’s been doing. I think he heard that side, and combined his L.A. pop stuff with my Mobile Alabama stuff. Marshall brought it-without a doubt. I cannot wait to do album 2 with Marshall because he brings the songs to life.

PGM: Do you see yourself in a similar position as Kenny Chesney, Keith Urban, Mac McAnally, and other notable country superstars?

Walker Hayes: Mac is huge. I opened for him in Jacksonville, Mississippi once. He sad with me in the green room and fed me with amazing knowledge. It was great-oh, yes. If a kid my age, when I am Mac’s age, gets interviewed and asked, “Would you like to be like Walker Hayes?” What an honor. So yes, I want to be successful. I gotta take care of my family; this is my job. I am married with 3 children and they have to eat, and I am not good at anything else. I have to work, I gotta go out and make it.

PGM: You could work the looks too…..

Walker Hayes: You know…if music falls through, I have thought about runway stuff-I don’t know.