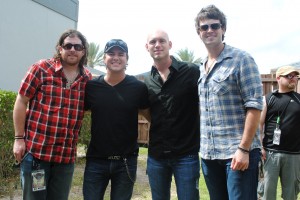 The Eli Young Band has formed a dynamic friendship that has helped them to survive as a group, and to be successful as opposed to other bands.

The former students of the University of Northern Texas at Denton, all college friends, enjoy performing on stage for their fans. Simply giving the fans a live show.

In an interview at the Country Music Throwdown in West Palm Beach, Florida, the guys shared with us how they used fan power to propel one of their recent records to amazing success.

PGM: As you enjoying the tour?

The Eli Young Band: We are. So far it has met every expectations that we’ve had. It’s so well organized. Everyone is so well prepared.

PGM: Do you think you will join the tour next year?

The Eli Young Band: We would love to. This is our first year. All our fans will get to know this tour, and we are having a good time. These are the people who will tell the stories to their friends, and make it bigger next year. It is really cool they have this opportunity to make this whole tour their own. We are willing to make a commitment to return next year. As long as they want us back, we won’t try to make anybody too angry while we are here.

PGM: How did you get your start?

The Eli Young Band: We were all students at the University of North Texas. We started jamming, writing and playing music from there. We are 4 friends with that same thing in common. We all came to college wanting to play music, not all of us were planning on taking music classes; then going that route we had the passion in the back of our heads that we wanted to do it. We are really lucky to find each other, and it has really helped–going down the road this far ahead, 9 years later, because we were friends first we are able to maintain a good relationship to make it happen.

The Eli Young Band: Yes. There is always some kind of fights. I think we got all the really good stuff out in the first few years, everything else is just good and dandy.

PGM: Do you have any upcoming tours after this one?

The Eli Young Band: We just recorded a song for the Lynryd Skynryd tribute album. We recorded “Gimmie 3 Steps”, and we are out promoting ‘Guinevere’, which is our current single. It all happens because there was a demand for the song. Our fans made it a single instead of some marketing team deciding this song might work.

PGM: How did promote it?

The Eli Young Band: We made a music video. There were all these indicators to us
1) At our shows, the fans were singing and screaming every words-loudly back at us.
2) It was selling really well without being on the radio
The 4 of us decided to make a video without it being a single-just to give the fans something back for loving the song. People post things online to our social pages, saying how much they love the song, and relate to the story. They saw the video on tv, and started calling the radio stations requesting it. The stations were excited to play it, then it became an official radio single. That’s all the power of the fans.

The Eli Young Band: It’s hard to see past this tour right now. We look at our calendar, and as soon as we are done we are going right back into the studio. We are always up for playing at shows. It is a fun time for us to be on  one big traveling circus. Hopefully, you will see a new record coming out at the beginning of next year.

Check out more of The Eli Young Band at http://www.eliyoungband.com/videoandmusic.aspx or http://www.countrythrowdown.com/.