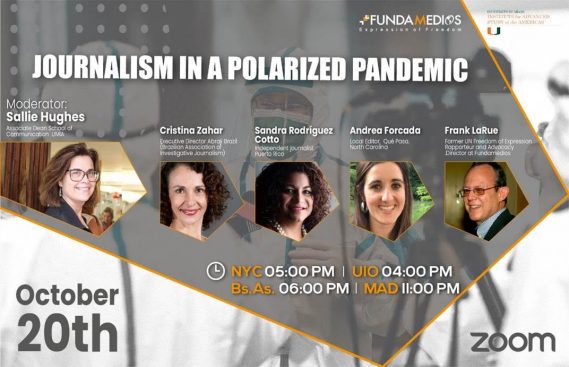 This stellar panel of journalists and legal experts explores risks and resiliency during a time of unprecedented challenges to journalism and freedom of expression across the Americas.

Faculty Fellow for Crime, Corruption and Conflict Research Area, University of Miami Institute for Advanced Study of the Americas

Cristina Zahar joined Abraji (Brazilian Association of Investigative Journalism) in 2018 as its executive director. She has a degree in Journalism from Cásper Líbero and 30 years of experience. Zahar was assistant editor of Sports and Economics at Folha de S.Paulo, editorial director of Abril Coleções and CEO in Brazil of English publisher Eaglemoss. She has a DEA (Masters) in Communication from Michel de Montaigne University (Bordeaux III) in France and an MBA in Business Management from FIA-USP.

Sandra D. Rodríguez Cotto is a journalist with decades of experience in Puerto Rico, the United States, and several Latin American countries. She works as a news and policy analyst, radio commentator, television producer, columnist, and blogger. She conducts her syndicated radio program on a series of regional stations that make up the Puerto Rico Information Network, is an analyst at radio station WPAB Ponce, and publishes a weekly column in the cyber newspaper NotiCel. She is also a contributor to several media outlets in the U.S. (El Diario La Prensa, All Digitocracy, Huffington Post, USA Today, Politico Magazine) and the Public Relations Portal of Latin America, based in Argentina. She has authored several books on communication and journalism, most recently Bitácora de una Transmisión Radial (Log of a Radio Transmission; Trabalis Editores, 2018), chronicled during the passage of Hurricane Maria.

Andrea Forcada Fraile is a journalist and communications specialist focusing on migration issues. She has a bachelor’s degree in Journalism from the Universidad Autónoma de Barcelona, a Master’s in European Journalism from the Institute des Hautes Études des Communications Sociales (Brussels), and a Master’s in International Development and Cooperation from the European Institute Campus Stellae (Santiago de Compostela). Andrea was born in Barcelona and has worked in Belgium, India and Sri Lanka. Andrea is currently the editor of Qué Pasa newspaper in the Piedmont-Triad area, North Carolina.

Sallie Hughes is Associate Professor in the Department of Journalism in the School of Communication and Faculty Fellow for the research area addressing Crime, Corruption and Conflict at the Institute for Advanced Study of the Americas (UMIA), both at the University of Miami. She coordinates the Latin American region of the Worlds of Journalism Study, the largest cross-national study of journalists’ working conditions, professional values and occupational epistemologies. She is the author of Newsrooms in Conflict: Journalism and the Democratization of Mexico and co-author of Making a Life in Multiethnic Miami: Immigration and the Rise of a Global City. Her current research interests include journalist safety, coping and resiliency, and she recently joined a team of invited researchers who are advising Reporters Without Borders on the methodology of their annual Press Freedom Index.