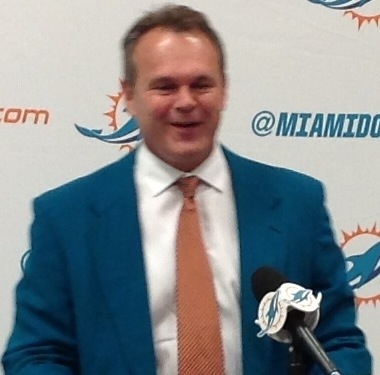 Former Miami Dolphins player John Offerdahl has joined an elite group of Dolphins greats to be the 25th individual to be inducted in the Dolphins Honor Roll 2013. He will be the third linebacker to be added, following Pro Football Hall of Famer Nick Buoniconti and Zach Thomas.

“Coach Shula, is a living legend, ” Offerdahl said. “I’m so honored to be receiving this award and have the opportunity to be there with Coach Shula, too.”

The announcement came prior to the Miami Dolphins and the Greater Miami Chamber of Commerce 2013 Kickoff Luncheon on Friday, August 16th at the Hilton of Downtown Miami presented by Morrison, Brown, Argiz & Farra, LLC. This interactive luncheon was a unique event where Miami Dolphins fans enjoyed a meal alongside their favorite players and coaches. The audience was entertained by the Miami Dolphins Cheerleaders and included player Q&A panels, emceed by Dolphins alumni and local media personalities Jimmy Cefalo, Joe Rose and Kim Bokamper. Real estate developer, Jorge Perez and Emilio Estefan, Dolphins partner and husband of Gloria Estefan were also in attendance.

Don Shula described Offerdahl as a relentless player, and a professional who practiced as hard as he played. “When John Offerdahl tackled you, you went down,” the former Dolphins coach shared in a statement. “John could do it all. He was like a quarterback on our defense.”

A humble Wisconsin native, John never expected such recognition and was all ‘pumped’ and excited when he received the news.

“I never dreamt I would be standing here. It is a dream come true for a Wisconsinite,” John shared with us. “I get to share it with people. I have been gifted for the ability to play for the Miami Dolphins. What an honor. By works, it’s been a gift.”

When he was drafted out of the Western Michigan University to the Miami Dolphins in 1986, John was a no-name from a no-name team who had to prove himself. Under coach Shula’s guidance, Offerdahl immediately became a star. He was honored as the NFL Rookie of the Year in 1986 while becoming the first Dolphins linebacker in franchise history to be named a starter in the Pro Bowl. John attributed his success to great coaches who have impacted his life, influenced and set high bars for him to reach.

“When I got drafted in 1986, Coach Shula didn’t look at me because of my size, my speed, my strength, maybe not even because of my smarts,” John continued. “He drafted me because, I was gifted with a hard head. And that hard head carried me eight years in a team and in a city that I absolutely loved and continue to love.”

Throughout those eight years, John made five Pro Bowl appearances and his career was sidelined by hamstring and shoulder injuries causing him to retire in 1994.

The retired player, now thank all those who have affected his career in a positive way. The ones who have challenged and motivated him to become a better player and team mate, from Glenn Blackwood, Coach Shula, Tim Robbie, Stephen Ross, Wayne Huizenga to Joe Robbie, the Dolphins founder who gave him a chance.

“Tim Robbie for being with me; Wayne Huizenga for keeping me motivated, Stephen Ross for giving me this opportunity to be recognized; Nat Moore and Glen Blackwood, my mentors, were great people to learn from, and that carried me for eight years. I thank them,” he said.

Offerdahl went to college on a half scholarship and had no aspirations to play football. Growing up in Wisconsin, he played the French horn and almost quit college in his junior year after receiving an F in organic chemistry. When he was recruited for the college football team, he was listed as a walk-on, and on his recruitment sheet it listed, four sisters, plays French horn.

“That was my life,” John Offerdahl shared.

Throughout his eight years with the Miami Dolphins, Offerdahl had many defining moments to share. One vivid memory was his induction into the Monday night circus of the NFL, which taught him that life has a lot of things to be nervous about, and football was one of them.

“The most defining was my first Monday night football game laying in the corner of the endzone stretching out. Coach Shula came over me, looked down and said, ‘Offerdahl, you nervous?’ And I mean I was laying down, looking up, sweat in my eyes and said, ‘Coach, not really.’ He said, in very clear terms, ‘You better be.”

Since his retirement in 1994, John has remained heavily involved in the community and has become a culinary master throughout the South Florida community. Known as the ‘Bagel Boy’, he grew up playing football and selling bagels. He and his wife, Lynn have transferred both passions into a successful franchise with seven Offerdahl’s Cafe Grille throughout Dade, Broward and Palm Beach counties offering fresh and quick bites.

In 1986, John Offerdahl may have been a no-name, now his name is cemented in Miami Dolphins’ history and legacy. He will be inducted to the Honor Roll at halftime on October 31 when the Miami Dolphins plays the Cincinnati Bengals. John will join a prestigious club with the 1972 “Perfect Season” team who will be recognized by the President of the United States, President Barack Obama in an exclusive ceremony at the White House.

“I’m honored that the accomplishments of the 1972 Dolphins are going to be recognized by the President. It is a very special occasion and I know it’s something that all of us will enjoy and remember,” Don Shula, Miami Dolphins Hall of Famer coach expressed in a statement.

The 1972 “Perfect Season” team went undefeated all year en route to Super Bowl Championship, a pinnacle of sports achievement that has never been duplicated.