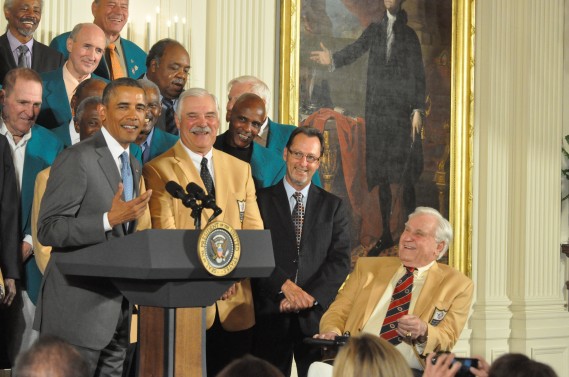 On August 20, 2013, the 1972 Miami Dolphins were honored by President Barack Obama in a private ceremony held at the White House. Premier Guide Miami bloggers Daedrian McNaughton and Gary Sandelier were invited to cover the event. Here I was, in the East Room within 30 feet of the President and the 1972 Miami Dolphins team being honored at the White House, even though I wasn’t around at the time it still did not diminish the thrill and the excitement to see these men getting the recognition they deserved. In 1972 Gary was only 20 years old when the Miami Dolphins won their major NFL and Super Bowl championship, undefeated. Today, any football fans of that era can recall where they were and what they were doing when the South Florida football team made history.

“I was there, because I remembered when it happened,” said Miami-Dade Mayor Carlos Gimenez who was at the White House for the ceremony. “I was a young man about 18 years old, and the whole town came together to celebrate a great time. It was more than just a championship, it was the first championship for the city and the first time that the community rallied around one team. It was an important time, an important day, an important accomplishment.”

It was a trip down memory lane as the 1972 Miami Dolphins were honored in a Presidential embrace by President Obama at the White House for their 1972 Super Bowl Championship win against the Washington Redskins (17-0).

On Tuesday, August 20, 2013, 31 former Miami Dolphins team members and Coach Don Shula finally received the recognition that was long overdue. Though it has been a long tradition than began in the 1865 during President Andrew Johnson’s presidency to host championship teams at the White House, the 1972 Dolphins had missed their opportunity after President Richard Nixon was embroiled in the Watergate Scandal in 1973.

Even though it took years to happen, Coach Shula was honored. “I’m honored that the accomplishments of the 1972 Dolphins are going to be recognized by the President with a ceremony at the White House. It is a very special occasion and I know it’s something that all of us will enjoy and remember,” the Miami Dolphins Hall of Fame Coach shared in a statement. A ring, a championship win and now a White House visit. Forty-one years later the Miami Dolphins are finally celebrating their win in grand fashion, a recognition from the President of the United States. Though the team is recognized as Florida’s first honorary team, the Florida Marlins and Miami Heat have received their special visits to the White House before the Dolphins. Now the spotlight finally falls on them as they receive the stamp of approval from President Obama.

“I am proud to welcome the only undefeated, untied team in NFL history to the White House for the very first time.” President Obama continued, “We want to congratulate all of them, and we want to make sure that they’re remembered for not only the history that sports fans will always remember, but also for all the countless contributions that they’ve made in their community as well.”

The ceremony was held in the East Room of the White House where the team members, Dolphins owners Tim Robbie and Stephen Ross along with Coach Shula assembled on a riser behind the President. Looking on were over one hundred invited family members, friends, community leaders including mayor Carlos Gimenez, real estate developer, Jorge Perez, Ricky Arriola, and Adrienne Arsht. Both national and Miami local media were in attendance. The ceremony was filled with light humor and lasted about fifteen minutes. The President who was only 11 years old at the time of the Dolphins win thought it was a bit unorthodox that he was the one honoring them after four decades.

“These guys never got their White House visit after winning Super Bowl VII. Some of them are a little harder to recognize these days,” he joked as the room erupted with laughter. “They don’t have the afros or the mutton chops, the Fu Manchus.”

He also acknowledged the outstanding and legendary Hall of Fame Coach Don Shula for his contribution to the team and the community. And later thanked the entire Dolphins organization including owners Stephen Ross and Tim Robbie for making the event possible after many years.

With Coach Shula as the winningest coach in NFL history, seven players in the Hall of Fame, unbroken records, the ’72 team is not just a team, they are a legendary team. And given the chance in 1973, they would have been etched in history as the first NFL team to be honored at the White House. Now the President admits it is a fun thing to do. After all it was time to pay tribute to the NFL’s only perfect team; the only team ever with two 1,000 yard rushers.

“These guys were juggernaut,” he says.

Football is an all American past time, and the President is a big fan, unfortunately a Chicago Bears fan. Like the Miami Dolphins, the 1985 Bears received a belated White House reception. Their visit was cancelled due to the Space Shuttle Challenger disaster. However, when the President hosted them on the South Lawn, he called them, “the greatest team ever”. Ironically, the Bears lost one game in their nearly perfect season to the Miami Dolphins.

“I take it with a grain of salt,” the President said after being interrupted by Coach Shula. “The Bears lost once in their nearly perfect season…to the Dolphins.”

Before ending, the President congratulated the team and acknowledged their accomplishments.

“Nobody can argue with this record,” he said. These men have made countless contributions to their communities. “Players from this team have gone on to become a minister, a mayor, a doctor, a state senator, a high school counselor, many successful businessmen.  Nick Buoniconti helped found the world’s most comprehensive spinal cord research center.  Some have dabbled in acting. I hear somebody serves up a pretty good T-bone as well,” President Obama joked. After the President’s remarks, Coach Shula rose from his scooter and presented President Obama with a commemorative 1972 Dolphins jersey with the number 72 and the word UNDEFEATED inscribed on the back. The jersey was autographed by the team members. Coach Shula also told the President that he hoped he would find a special place in his office for the gift. An invitation to the White House for any sports team may be the pinnacle of a championship win, however, it is not always accepted by all team mates who have strong political views about its occupant. As for the 1972 Miami Dolphins, three star players Hall of Fame center Jim Langer, guard Bob Kuechenberg, and defensive tackle Manny Fernandez  declined the invite, citing political differences. Statements shared with the Sun Sentinel

Kuechenberg: “I just don’t believe in this administration at all.”

Fernandez: “My views are diametrically opposed to the president’s.”

Langer: “I don’t want to be in a room with those people and pretend I’m having a good time. I can’t do that.”

Members of the Miami community who visited the White House for the ceremony including Mayor Gimenez, Jorge Perez, and Ricky Arriola deemed the event apolitical, therefore should not have been rejected by the former players. And thought it was a direct insult to coach Shula.

“I think some of the players not going was misguided. It was apolitical, completely,” Jorge M. Perez, real estate developer shared with Premier Guide Miami on his way home from the ceremony. “It was a celebration of the greatest football season. A classy group of guys honored by the President. Whether we like him or not, he is our President, and I thought it was not the right thing to do.”

Individuals who participate in team sports like football are generally taught to be play as team members and not as individuals. The recognition was for their team efforts, and should have been treated as such.

“It was really stupid that they did not show up. It was about recognizing their achievement–it had nothing to do with politics,” Ricky Arriola, chairman of Board of Directors for Adrienne Arsht Center for the Performing Arts of Miami Dade County shared. “Football is America’s sport, the President is a big fan, and they should have been there. This was also about coach Shula, and the team came together to reminisce, to honor his legacy, the accomplishment of the team. Politics had nothing to do with the event, and those players should have been there.”