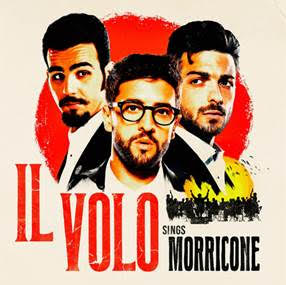 Superstar Italian trio IL VOLO released their highly anticipated new album IL VOLO SINGS MORRICONE (Sony Masterworks), available everywhere now.  Endorsed by Ennio Morricone’s family, IL VOLO SINGS MORRICONE is a dedication to the beloved Maestro and an exciting journey through the art and music of one of the greatest composers of the 20th century. In support of the new album, the trio will head out on the road once again on a 25-date North American tour, which comes to FLA Live Arena in Sunrise, Fla. on April 10, 2022. Tickets are available starting Friday, Nov. 12.  Additionally, the TV broadcast special, Il Volo: Tribute to Ennio Morricone, will make its premiere on PBS stations nationwide beginning Nov. 27. Local listings for airdates & time can be found here.

Of the new album, Il Volo shares: “We are very proud to continue Ennio Morricone’s legacy by sharing the beauty of his Italian melodies through our voices with a new generation.”

IL VOLO SINGS MORRICONE is comprised of 14 songs that recall the Maestro’s legendary melodies from “The Ecstasy of Gold” (from The Good, the Bad, and the Ugly), featuring new lyrics written specifically for the trio by Ennio Morricone’s son, Andrea Morricone to “Your Love” (from Once Upon a Time in the West). Another highlight is “I colori dell’amore” (“The Colors of Love”), an unreleased track composed by Andrea for the trio, which was unexpectedly performed live for the first time at The Arena di Verona on June 5, 2021. Rounding out the album is“E più ti penso” (“The More I Think of You”), a medley of Ennio Morricone’s scores from the films Once Upon a Time in America and Malèna, a nod to the trio’s live performance of the song with the Maestro at Piazza del Popolo in Rome in 2011. It also features three artist collaborations: violinist David Garrett on “La Califfa” (“The Lady Caliph”), HAUSER from 2CELLOS on “Se” (“If”) and trumpet player Chris Botti on “Come Sail Away.”

In celebration of their new album, Il Volo will also embark on a world tour, which kicks off in North America onMarch 4, 2022 in Canada and continues to the United States beginning March 11.  The 25-date North American tour will include stops at iconic venues like Radio City Music Hall in New York, Dolby Theatre in Los Angeles, and the Orpheum Theatre in San Francisco.  Tickets for the tour will be available everywhere Friday, Nov. 12.  Il Volo will be offering a range of VIP packages including exclusive merchandise, a pre-show soiree, and meet and greet and photo with the trio.  For the latest in touring news and ticketing information, please visit ilvolomusic.com.

On IL VOLO SINGS MORRICONE, audiences can expect to delight in the unforgettable melodies by the celebrated conductor, musician, and composer of some of the greatest film soundtracks in the history of international cinema together with the trio’s unique voices.

Piero Barone, Gianluca Ginoble and Ignazio Boschetto started their careers very young in 2009. Their constant rise led them to perform with music icons likes Barbra Streisand and Placido Domingo. Other accomplishments include winning the Sanremo Festival at the young age of 20, filling Arena di Verona and Teatro Antico di Taormina in their home country of Italy and Radio City Music Hall in New York, and reaping standing ovations on their tours all over Europe, America, and Japan.  In 2019, Il Volo celebrated their 10th anniversary as a trio.  To date, they have sold over 2 million albums and amassed 220 million global streams, over 500 million views, and 1 million-plus followers on YouTube. This year, Il Volo decided to dedicate part of their extraordinary career to Ennio Morricone to celebrate and honor the maestro and his legacy of work one year after his death. With the support of Ennio Morricone’s family, Il Volo releases the new album Il Volo Sings Morricone (Sony Masterworks), featuring the music of one of the greatest composers of the 20th century, on November 5, 2021.

Home to the Florida Panthers Hockey Club and leading international concerts and events, the Broward County-owned FLA Live Arena is one of the top ranked venues of its kind in the world, servicing Broward, Collier, Miami-Dade, Monroe and Palm Beach Counties and beyond. In 2020, FLA Live Arena became the first National Hockey League building to earn the global benchmark WELL Building Institute (IWBI)’s WELL Health-Safety Rating for Facility Operations and Management. For the latest info about upcoming events, visit www.FlaLiveArena.com and follow @FLALiveArena on Twitter, Instagram and Facebook.