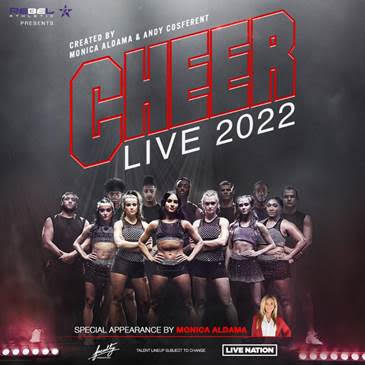 TICKETS GO ON SALE TO THE PUBLIC FRIDAY, FEB. 4 AT 10 a.m. ON TICKETMASTER.COM

CHEER LIVE presenting sponsor Rebel Athletic is proud to offer access to presale tickets beginning Tuesday, Feb. 1 at 10 a.m. until Thursday, Feb. 3 at 10 p.m. For complete details about presales and group sales for teams of ten (10) or more, visit www.cheertouroffical.com.

Citi is the official card of the CHEER LIVE tour. Citi cardmembers will have access to presale tickets beginning Tuesday, Feb. 1 at 10 a.m. until Thursday, Feb. 3 at 10 p.m. through the Citi Entertainment program. For complete presale details visit www.citientertainment.com.

Bringing together fan favorites from the two most successful rival cheer programs in the country, Navarro Collegeand Trinity Valley Community College, CHEER LIVE will feature 14x National Champion coach and best-selling author, Monica Aldama alongside cheer stars such as Gabi Butler and Morgan Simianer. The full cast features Maddy Brum, Angel Rice, Dee Joseph, James Thomas, Jeron Hazelwood, Gillian Rupert, Cassadee Dunlap,and more to be announced. The premiere athletes all make mat for an electrifying exhibition of never-before-seen stunts and stage performances that are sure to have fans on the edge of their seats. Without the restraints of score cards, judges, and time limits, CHEER LIVE will transform the nail-biting sport of competitive cheerleading into a first of its kind premiere athletic event staged with the epic production value of a live concert.

“I’m so excited to cheer again and to have the feeling of performing and going on tour,” says Morgan Simianer. “We are all coming together without the competitions and pressure  — It’s going to be so fun! I want all of the cheerleaders to see this and think, that can be me one day.”

“The world has fallen in love with the stars of Cheer and we were convinced that their careers as Cheerleaders should not come to an end after Daytona. CHEER LIVE will change the way the sport is viewed forever, allowing younger & aspiring cheerleaders to envision a future of cheerleading beyond the mat. These world class cheer stars are going to blow minds when they go FULL OUT this summer on the CHEER LIVE TOUR…” added tour creator and producer Jared Paul, Founder of Faculty Productions.

The Emmy award winning docuseries CHEER recently debuted their highly anticipated second season on Netflix, immediately soaring to number one and solidifying its place as a cultural phenomenon. Cheer Live is created by Monica Aldama and Andy Cosferent.

One of the most successful athletic coaches in the country, Monica Aldama became an overnight sensation after starring in the Emmy Award-winning Netflix docuseries CHEER, which chronicles her tremendous leadership in building one of the country’s most successful cheerleading programs from the ground up. Monica is heralded as a pioneer in the world of cheer, one who combines her sharp, high-achieving mindset, business acumen, and tremendous empathy and dedication to her students, to set the bar ever-higher.

Celebrated for her hallmark phrase, “You keep going until you get it right, then keep going until you can’t get it wrong,” Monica is her students’ biggest advocate, always encouraging them to be the best versions of themselves. She has been with Navarro College for over 26 years and has led the cheer squad to win 14 National Championships.

Profiled in The Wall Street Journal, The New Yorker, New York Magazine, Oprah, Women’s Health, and more, Monica is a role model and paragon of fierce leadership. A true force and inspiration that has captured the hearts of the world, Monica brings her empowering messages on leadership, resilience, teamwork, and success to audiences worldwide. She also shares messages of inclusivity and acceptance, drawing on her experiences working with racially diverse, LGBTQ+, and low-income students in an insular, small town.

Monica attended the University of Texas at Austin, where she earned her B.B.A. in Finance, and the University of Texas at Tyler for her M.B.A. She was inducted into the inaugural class of the Navarro College Hall of Fame in 2019 and was a contestant on season 29 of Dancing with the Stars. She has expanded her business ventures by partnering with BlackSleeve Media to develop a first of its kind cheerleading app that includes games, virtual competition, podcasts, industry events and much more. Monica also published her first book, Full Out, which became a #1 AMAZON Bestseller in three categories. Full Out is available now.

The Emmy-winning breakout sensation is back and the stakes have never been higher. As Season 2 opens and the buzz around their newfound stardom threatens to alter the dynamic of Navarro Cheer, the team finds no amount of press frenzy could compare to the challenges they must face when COVID-19 upends the 2020 cheer season and a serious criminal accusation is levied at one of their teammates. Against that dramatic backdrop, the 9-episode season expands to showcase Navarro’s fiercest rival: Trinity Valley Community College. As with the Navarro team, TVCC has a charismatic coach and breakout stars whose struggles, triumphs and stories extend far beyond the mat. As both teams push for the 2021 championship in Daytona, familiar faces take compelling detours and new contenders make a name for themselves. Cheer Season 2 is directed by Greg Whiteley (Last Chance U) and produced by One Potato Productions and Boardwalk Pictures.

Rebel Athletic was founded in 2013 as the original luxury couture cheerleading uniform company for the All Star Cheerleading Industry. The company has expanded in nine years to include a School Cheerleading Apparel division, a Pro Team division, a Retail division and most recently a Dance division with products ranging from shoes, bags, cosmetics, sports apparel, athletic-wear, athleisure-wear and unique “exclusive drop” items.  Rebel’s emphasis is on creating trends for the cheer and dance industries and carving the path for the future of cheer and dance fashion. Luxury craftsmanship, personalized service, couture design and incredible value are Rebel’s hallmarks.  With these efforts Rebel provides a stage for the girls and women who wear the Rebel Mark to dent the universe through fashion and self-expression. For more information, www.RebelAthletic.com / www.RebelAthleticCheer.com

Home to the Florida Panthers Hockey Club and leading international concerts and events, the Broward County-owned FLA Live Arena is one of the top ranked venues of its kind in the world, servicing Broward, Collier, Miami-Dade, Monroe and Palm Beach Counties and beyond. In 2020, FLA Live Arena became the first National Hockey League building to earn the global benchmark WELL Building Institute (IWBI)’s WELL Health-Safety Rating for Facility Operations and Management. For the latest info about upcoming events, visit www.FlaLiveArena.com and follow @FLALiveArena on Twitter, Instagram and Facebook.