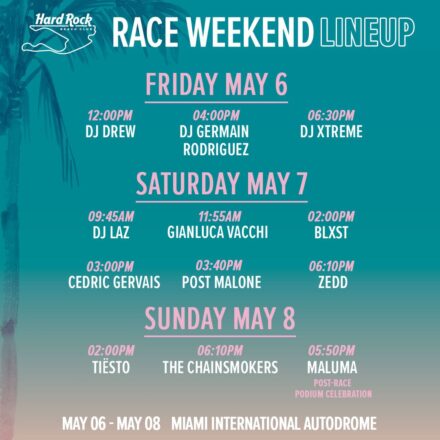 South Florida Motorsports (SFM) the promoter of the Formula 1® Crypto.com Miami Grand Prix and Hard Rock International are delighted to jointly announce the DJs and music acts that will perform across the race weekend at the inaugural event in Miami Gardens. The inclusion of all these artists will provide an amazing atmosphere to the race weekend and highlight Miami’s pre-eminence in the dance music scene.

“As founding partners of the Formula 1® Crypto.com Miami Grand Prix, it was imperative for us to infuse the race week experience with the world-class entertainment that Hard Rock is known for,” said Keith Sheldon, President of Entertainment for Hard Rock.  “With some of the top names in music and pop culture performing for the entire campus from the Hard Rock Beach Club stage, the inaugural race in South Florida will offer race fans unprecedented live music experiences.”

“We are delighted that some of the biggest music producers and DJs in the world will be providing the soundtrack to an incredible weekend of racing,” said Jeremy Walls, Senior Vice President, Chief Revenue Officer of Hard Rock Stadium & Formula 1® Crypto.com Miami Grand Prix. “It’s great that fans will hear the music from Post Malone, The Chainsmokers, Tiësto, Zedd and iHeartRadio DJs that are performing in Hard Rock Beach Club each day, in addition to Maluma who will deliver a special performance on the podium after the race.” 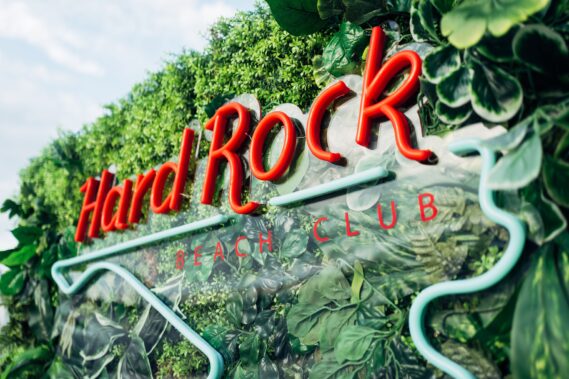 An epic weekend of live music begins at Hard Rock Beach Club on Friday via Hard Rock’s partnership with iHeartRadio, which will bring feature DJs to the set at noon. From Miami’s number one hit music station Y100, DJ Drew will get the party started followed by the Latin sounds of TU 94.9 as DJ Germain Rodriguez performs ahead of Xtreme.

Ahead of Formula 1® qualifying on Saturday afternoon, Grammy nominated global superstar, Post Malone – who also performs at Hard Rock Live at the Guitar Hotel at Seminole Hard Rock Hotel & Casino Hollywood on the night prior – will perform a few of his #1 records at the Miami International Autodrome. Rounding out the day’s entertainment is the award-winning DJ, record producer, and songwriter, Zedd.  Both megastars will broadcast live from Hard Rock Beach Club to the entire Campus.

Taking the stage on Sunday afternoon will be the Grammy Award-winning and international icon Tiësto who has been credited by Mixmag as “The Greatest DJ of All Time.” With over 36 million albums sold, Tiësto continues to revolutionize the dance music landscape.  Closing out the race festivities as the final headliner will be the world famous pop duo, The Chainsmokers. Their long-awaited fourth studio album, So Far So Good, is set to be released the week after the race and is expected to follow in the footsteps of their last album and top the Billboard Albums Chart when it debuts. They will bring the Formula 1® Crypto.com Miami Grand Prix party to an end on Sunday night.

The flavor of the music from Hard Rock Beach Club across the weekend will reflect Hard Rock’s connectivity with some of today’s most popular music acts, while integrating the huge Miami music scene which is famous for its beats and award-winning DJs and producers. The fusion of hip hop, dance and Latino sounds will culminate with Global Superstar Maluma who will perform on the podium on the south side of Hard Rock Stadium, once the Formula 1® drivers have received their winners’ trophies.  F1 fans will also have an opportunity to see Maluma at Hard Rock Live on the Thursday prior to race weekend at the Guitar Hotel at Seminole Hard Rock Hotel & Casino Hollywood. 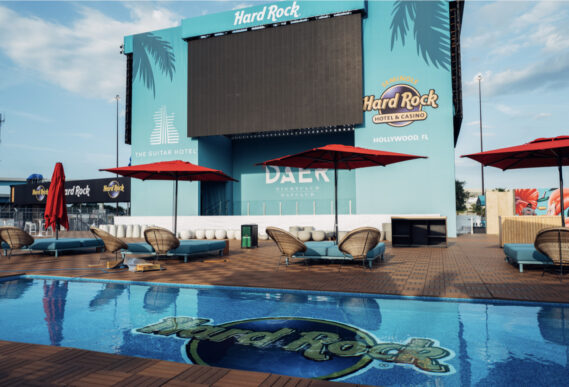