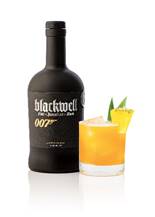 Blackwell Rum is delighted to announce that it has partnered with the 007 franchise. Chris Blackwell – the Rock & Roll Hall of Famer and owner of Ian Fleming’s former residence, GoldenEye – is celebrating the release of the 25th Bond film, No Time To Die, with a special 007 Limited Edition release of his Blackwell Fine Jamaican Rum. The 750 ml bottle will retail for $35 and can be found starting April 1 in major metro markets.

“James Bond has been a big part of my life, from my childhood lunches with Ian Fleming at GoldenEye to being a location scout on the first movie, Dr. No (1962),” says Blackwell.   The upcoming Bond movie, No Time To Die, has been partly shot in Jamaica, and the involvement from Blackwell on the island has made this very special relationship come full circle.

Blackwell Fine Jamaican Rum is inspired by his family’s time-honored recipe. This aged, rich and fragrant dark gold rum is filled with the warmth and sensuality of Jamaica.  “This is a rum that celebrates Jamaica, my friendships, and also my family legacy,” adds Blackwell.

No Time To Die is in cinemas globally from April 2, 2020 in the U.K. through Universal Pictures International and in the U.S on April 10, from MGM via their United Artists Releasing banner.

In No Time To Die, Bond has left active service and is enjoying a tranquil life in Jamaica. His peace is short-lived when his old friend Felix Leiter from the CIA turns up asking for help. The mission to rescue a kidnapped scientist turns out to be far more treacherous than expected, leading Bond onto the trail of a mysterious villain armed with dangerous new technology.