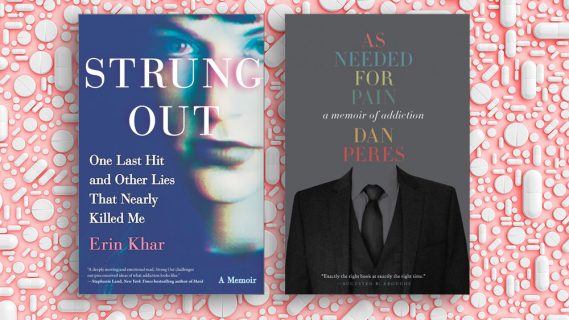 Join us for a conversation with
ERIN KHAR & DAN PERES
discussing their books
Strung Out: One Last Hit and Other Lies That Nearly Killed Me and As Needed for Pain: A Memoir of Addiction

Join us for a special double feature with authors Erin Khar and Dan Peres discussing their books on addiction.

Strung Out: One Last Hit and Other Lies That Nearly Killed Me by Erin Khar

In this deeply personal and illuminating memoir about her fifteen-year struggle with heroin, Khar sheds profound light on the opioid crisis and gives a voice to the over two million people in America currently battling with this addiction. Strung Out (Park Row, $27.99) is a life-affirming story of resilience while also a gripping investigation into the psychology of addiction and why people turn to opioids in the first place.

As Needed for Pain: A Memoir of Addiction by Dan Peres

In the vein of Mary Karr’s Lit, Augusten Burroughs’ Dry and Sarah Hepola’s Blackout, As Needed for Pain (Harper, $28.99) is a raw and riveting—and often wryly funny—addiction memoir from one of New York media’s most accomplished editors which explores his never-before-told story of opioid addiction and the drastic impact it had on his life and career. As Needed for Pain is a brilliant, shocking dissection of a life teetering on the edge of destruction, and what it took to pull back from the brink.

Erin Khar is known for her writing on addiction, recovery, mental health, relationships, parenting, infertility, and self-care. Her weekly advice column, Ask Erin, is published on Ravishly. Her personal essays have appeared in SELF, Marie Claire, Esquire, Cosmopolitan, Good Housekeeping, Redbook, and others. She’s the recipient of the Eric Hoffer Editor’s Choice Prize and lives in New York City with her husband and two kids.

Dan Peres was editor in chief of Details for fifteen years, starting in 2000, when the title relaunched under his leadership. During his tenure, the magazine won many awards, including two National Magazine Awards. Before taking the editorship of Details, Dan spent nine years at W Magazine, overseeing bureaus in Paris, London, and Milan. While in college, he worked as a copy boy at the New York Times and later as a research assistant at Esquire. He is the author of Details Men’s Style Manual. He lives in New York and has three sons.