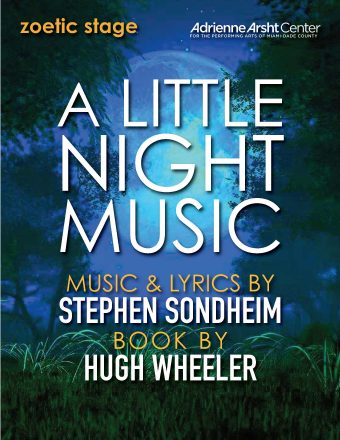 Zoetic Stage continues its relationship with the work of Sondheim

Sunday in the Park with George and Sweeney Todd

Zoetic Stage (@ZoeticStageMIA) and the Adrienne Arsht Center for the Performing Arts of Miami-Dade County (@ArshtCenter) are proud to present Stephen Sondheim’s A LITTLE NIGHT MUSIC, the Tony Award-winning musical, based on the Ingmar Bergman film Smiles of a Summer Nightthat explores the affairs surrounding actress Desirée Armfeldt and the men who love her. Playing March 19 – April 12, 2020 in the intimate Carnival Studio Theater (Ziff Ballet Opera House), A LITTLE NIGHT MUSIC continues Zoetic Stage’s 2019-2020 season and the Arsht Center’s 2019-2020 Theater Up Close Series.

Tickets to A LITTLE NIGHT MUSIC are $50 and $55*. Tickets may be purchased through the Adrienne Arsht Center Box Office by calling (305) 949-6722, or online at arshtcenter.org.

Directed by Zoetic Stage Artistic Director Stuart Meltzer and hailed by The New York Times as “sophisticated and enchanting,” this beloved Sondheim classic explores the tangled web of affairs around actress Desirée Armfeldt, and the men who love her – a lawyer by the name of Fredrik Egerman and the Count Carl-Magnus Malcom. When the actress performs in Fredrik’s town, the estranged lovers’ passion rekindles, affecting everyone around them. As relevant today as when it first appeared on stage, this musical masterpiece explores class, fidelity and the human condition with humor, warmth and elegance.

ABOUT THE CAST AND CREATIVES

A LITTLE NIGHT MUSIC’s musical director is Caryl Fantel who is also on keyboards. Additional musicians include woodwinds by Diron Holloway and Brendon Matthew Wilkins, violin by Francesca Rossi, cello by Elena Alamilla, bass by Rupert Ziawinski and percussion by Ryan Hecker.