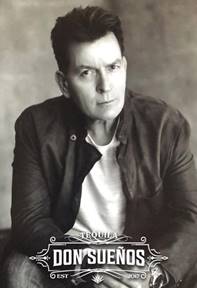 Charlie Sheen will bring a special Q&A event to The Pavilion at Seminole Casino Coconut Creek on Saturday, February 15, 2020 at 8 p.m.

The Moderator for the evening will be Lynn Martinez from Deco Drive, WSVN 7.

Guests must be invited or may enter to win two tickets plus a signed bottle of Don Sueños® Tequila and a “Meet & Greet” with Charlie Sheen by submitting a completed entry form at CasinoCoco.com through February 9.

Additionally, Sheen will make appearances throughout the casino’s Don Sueños® Tequila Giveaway taking place that day at the Player’s Club Xperience from noon to 10 p.m. Guests may earn 115 Tier Points to be eligible to receive a bottle of Don Sueños® Blanco.

Sheen is the co-owner of Don Sueños® Tequila along with Kumiko Zimmerman.

“While I am proud of my sobriety for over two years now and am firmly committed to living a clean and sober lifestyle, I chose to become a part owner of DonSueños because I know their tequila is of the highest quality,” said Sheen. “I’m excited to be able to work with Kumiko and the team to help Don Sueños continue to grow and to bring awareness, both to its outstanding products and to the charitable organizations it supports.”

Founded in 2017, the super-premium brand Don Sueños has quickly garnered widespread attention both for its high-quality spirits and its commitment to charitable causes. The brand’s expressions are crafted from single-estate blue weber agave, carefully cultivated in Los Altos, Jalisco, Mexico, and processed to produce a taste that is attracting tequila lovers worldwide.

In the 2000s, when Sheen replaced Michael J. Fox in “Spin City,” his performance earned him a Golden Globe Award for Best Actor – Television Series Musical or Comedy. He then starred in “Two and a Half Men” which earned him several Golden Globe and Emmy Award nominations.

He most recently starred in the FX comedy series “Anger Management,” which concluded its 100-episode run in 2014.