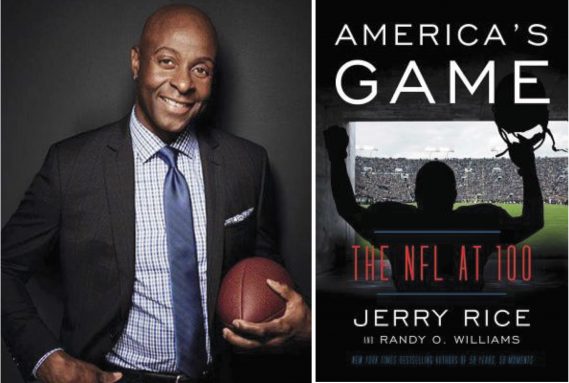 Meet
JERRY RICE
for a book signing of
America’s Game: The NFL at 100

A Hall of Fame wide receiver and three-time Super Bowl champion, Jerry Rice is regarded as the best wide receiver to ever play in the National Football League. During a fifteen-year career with the San Francisco 49ers, Rice teamed with Hall of Fame quarterbacks Steve Young and Joe Montana to win three Super Bowl championships (’88, ‘89 and ‘94) and a Super Bowl MVP award. Throughout his career, Rice has watched the sport he loves change and evolve, but in America’s Game, he digs deeper.

Over the past century, professional football has transformed from a game played in leather helmets on cow pastures to one of the most high-tech, popular sports on the planet. In this entertaining and concise history, Jerry Rice and Randy O. Williams celebrate the NFL’s centennial, bringing together colorful memories, insights, and personal experiences and observations from the heroes, losers, innovators, and defining legends who have played the game at its highest level.

The purchase of one ticket admits (2) two guests into the signing line and includes (1) one book, America’s Game. Please arrive early. Books will be distributed the day of the event. Absolutely NO POSED PHOTOGRAPHY will be allowed to ensure that we are able to accommodate all guests. Photos taken from the line are permitted. Absolutely NO MEMORABILIA allowed.