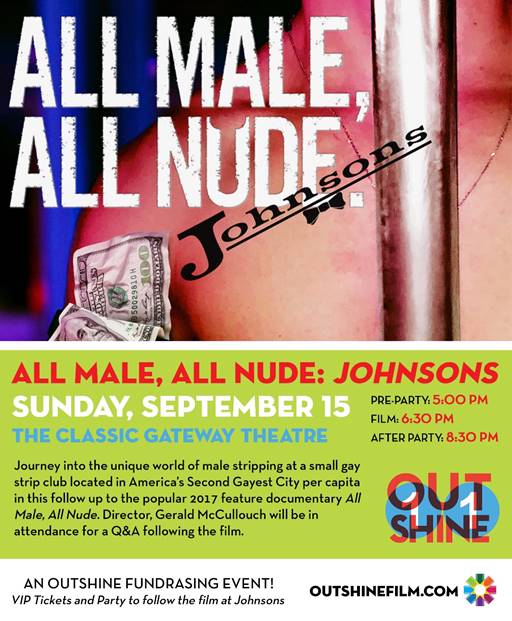 OUTshine LGBTQ+ Film Festival , a bi-annual film festival designed to inspire, entertain, educate and encourage a sense of community through international and culturally diverse media that offer historical and contemporary perspectives on the LGBTQ+ experience, and Breaking Glass Pictures, will present “All Male, All Nude: Johnsons” as its advance event fundraiser on Sunday, September 15. The pre-party starts at 5 p.m. while the locally produced documentary film will screen at 6:30 p.m. at The Classic Gateway Theatre (1820 E Sunrise Blvd in Fort Lauderdale). The after-party will take place at 8:30 p.m. at Johnsons (2340 Wilton Dr, Wilton Manors). The 11th annual Fort Lauderdale Edition of the OUTshine LGBTQ+ Film Festival, presented by Gilead and Broward County, will take place October 10 – 20 at various theatres throughout the city.

“We’re thrilled to debut ‘All Male, All Nude: Johnsons’ for our loyal film fans and newest cutting-edge cinema supporters,” said Victor Gimenez, executive director of the OUTshine LGBTQ+ Film Festival. “We invite cinephiles to help us celebrate the creativity, camaraderie and outstanding contributions that the LGBTQ+ community has made to both the local and international filmmaking industry. This event will help us raise funds to foster new talent and showcase independent filmmaking that stimulates discussion regarding LGBTQ+ awareness, lifestyles, diversity and inclusiveness.”

In this sexy follow-up film to director Gerald McCullouch’s (CSI, Daddy, the BearCity films) popular, steamy 2017 documentary, “All Male, All Nude”, “All Male, All Nude: Johnsons” will take audiences on a journey into the unique world of male stripping and a small gay strip club, Johnsons, located in America’s Second Gayest City per capita, Wilton Manors, Florida. Wilton Manors is the new home to the club’s creator and owner Matt Colunga, an award-winning body builder who was introduced in the first film and has spent the last 24 years in the male entertainment industry. Along the way, Colunga has rebranded the gay male strip club experience while becoming a beacon to this intriguing industry.

VIP tickets for the OUTshine LGBTQ+ Film Festival Fort Lauderdale’s screening fundraiser of “All Male, All Nude: Johnsons” are $125 and include a cast and crew meet-and-greet, film screening with cast and crew Q & As to follow and the private post party at Johnsons, complete with hors d’oeuvres and unlimited access to the club’s VIP rooms. The event will also feature an open bar courtesy of sponsor Absolut.