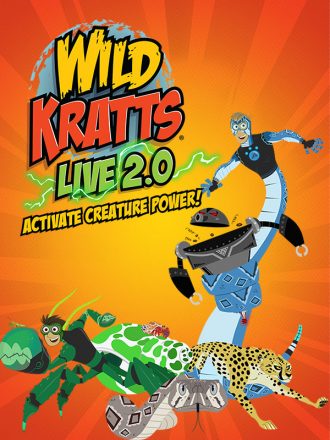 The Coral Springs Center for the Arts today announced that Wild Kratts LIVE 2.0 is coming to the Center for two performances on the day that comes around only once every four years. The state-of the-art performing arts center is located at 2855 Coral Springs Drive (33065).

In this show for the whole family, Chris and Martin take to the stage to activate new Creature Powers and go “off to the creature rescue!” With some help from Aviva and the rest of the Wild Kratts team, who will be animated and on screen at the Tortuga HQ, the brothers confront a comic villain and once again save the day, sharing fascinating tidbits about some of the world’s most amazing creatures along the way.

In fact, audience members are encouraged to bring along their animal knowledge and participate in the action right from their seats by calling out answers to the questions posed by the Kratt Brothers during the show.

Since their original Wild Kratts LIVE! touring show in 2014, Chris and Martin have performed to wildly-enthusiastic crowds of hundreds of thousands of fans – many of them sporting their own Creature Power Suits, just like the Kratt Brothers do in the popular series – in more than 135 cities across North America.

How to Get Tickets:

Coral Springs members can purchase tickets to Wild Kratts LIVE 2.0 as of Monday, September 23, and they go on public sale Friday, September 27, at 10 am. Tickets may be purchased by calling the Box Office at 954-344-5990 or going online to www.TheCenterCS.com.