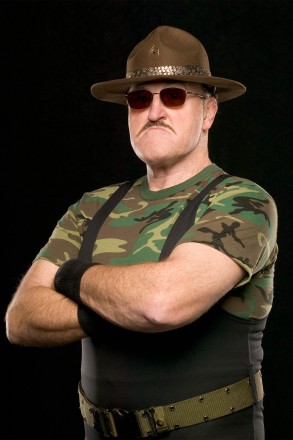 WWE Hall of Famer Sgt. Slaughter will be the Grand Marshal for Saturday’s NASCAR Nationwide Series championship race, the Ford 300, at Homestead-Miami Speedway.  Track President Matthew Becherer made the announcement.

“I am really excited to start the Ford 300,” said Slaughter.  “Ricky, Elliott, Justin and Aric have made the 2011 Nationwide Series special and I can’t wait to see who is named champion once the checkered flag is waved and history is made.”

Sgt. Slaughter is truly one of a kind. A former U.S. Marine, he earned his famous ring name during the service. Once he began his professional career, he would certainly solidify that name, intimidating adversaries and fans alike in his trademark drill sergeant attire. He remains one of the WWE’s most recognizable figures and comes to South Florida in advance of WrestleMania XXVIII, which will take place at Sun Life Stadium on April 1.  Following his retirement from full-time competition, he spent some time as WWE Commissioner and today serves as a WWE Ambassador.

“Sgt. Slaughter is a huge racing enthusiast,” said Becherer.  “I am sure he’ll put his full effort into giving the ‘Ladies and gentlemen, start your engines,’ command and it’ll be a lot of fun for the fans Saturday night.”