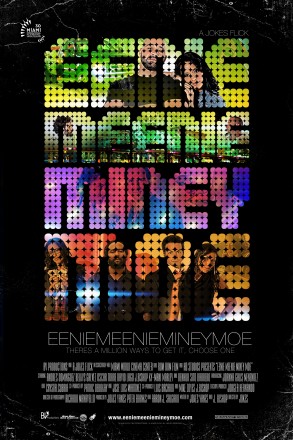 Miami is known for its paradise like weather, sexy people, and its rambunctious lifestyle, making it the perfect setting for Eenie Meenie Miney Moe- an Indie Crime Thriller. The film is based on Raul, a tow truck driver in Miami Beach, who wants to make money and make it fast. He has the perfect tool to open the doors to any car in Miami. Each car holds a prize; he soon learns that every reward has its consequences.

The film is brought to life by Miami Locals: Andres Dominguez, who plays the main character, tow truck driver Raul, he also starred in Magic City Memoirs. J. Bishop who not only plays the role of Vlad the mafia man eager to take on the next scam is also the co writer of the flick. Oscar Torre is Jimmy the club owner who likes to party and party with no restrictions; he has also graced Hollywood films, Counterpunch & The Hangover 3. Belkys Galvez plays Nikki, Miami’s sweetheart who loves the beach and its lifestyle. The actress has also worked RPM Miami. Ky-Mani Marley plays Tommy, Raul’s partner in crime, he is also known for acting in Shottas. The young and the restless star David Lago plays Marco the hardworking household provider looking for a break. The film also welcomes new comers Joanna Galis Menendez, who plays Monique, Kristine Cecelia, who stars as Lisa, the lady with all the street connections and Crystal Cubria, who plays Dee Dee. Each character is a true delineation of Miami’s behavior giving viewers the chance to relate to the film firsthand.

Eenie Meennie Miney Moe is a true testament to the current generation in Miami. The film is brutally honest, unleashing the consequences of the hustle and bustle.

“Miami is a young city that hasn’t really had a chance at its own identity in film” says Miami born and raised writer/director Jokes. “I’ve always wanted to create an authentic film in Miami, so the best way to do that is just to get the real thing; we are as authentic as it gets with local talent and local production” said Jokes Yanes

For trailer and other press inquiries please visit the Eenie Meennie Miney Moe website at http://www.eeniemeeniemineymoe.com/trailer.html